Episode 79 Memoir of a Delinquent Girlhood with Maureen Stanton 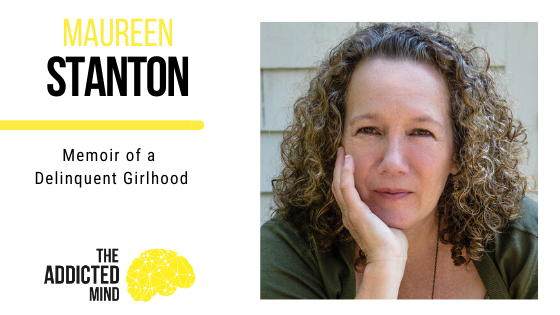 Today’s guest is Maureen Stanton, the author of the memoir, Body Leaping Backwards, Memoir of a Delinquent Girlhood.

Maureen spent about forty years writing her book but she kept avoiding taking it to the point of getting published because there was shame in it for her. So she only started writing the book seriously in 2014, once her dad had passed away. He had done the very best he could for her so she wouldn’t have wanted him to feel ashamed of her.

Maureen wanted to tell the story of what happened with her so long ago because she believes that it is still relevant and that it will still resonate with teenagers today, even though the specifics are different.

Maureen’s teenage years were a time of great anxiousness, sadness, and confusion. She felt that she wanted to disappear. She had feelings of self-doubt and she lacked self-confidence to the point of self-loathing. So she turned to drugs to self-medicate. She started using Angel Dust, a dissociative anesthetic that was a very prominent drug in the 1970s. It numbed her, helped her to escape from the emotional pain that she felt as a teenager, and allowed her to stop thinking about her insecurities and sadness.

Maureen is now in her late 50s. She kept all her diaries from before she was using, and from the time when she began feeling a sense of despair and started doing drugs. Reading through the diaries as an adult, she was able to remember just how she had felt then, so she was able to convey that very clearly in her book.

A lot of kids start using drugs or drinking during their fraught teenage years while crossing the bridge over the treacherous terrain from childhood to adulthood. Children who are suffering from psychic pain, and don’t have guidance, are more likely to start using drugs and alcohol.

Maureen started with alcohol and marijuana. Her friend’s older brother then introduced her to Angel Dust. As it was smoked in a joint, it seemed to Maureen to be very similar to marijuana, and there were no warnings at the time about the dangers of using this terrible drug. There was still a part of her, however, that realized that it would cause damage to her brain cells.

Mauren believes that essential loneliness and discomfort are felt by teenagers because they don’t yet know who they are.

Maureen feels shame about her terrible, delinquent behavior while she was using drugs. She does, however, feel extremely fortunate that there was no lasting harm, that she knows of, done to anyone.

Who we are, as individuals, is defined by our passions and our interests. Maureen gave all of that up for getting high. She progressively stopped doing the things she loved as she slid deeper into her addiction. So although the drugs helped her escape and provided some relief, she continued to erase herself. She eventually became so empty and despairing that she knew she had to ask for help. Her mother arranged for her to see a counselor and Maureen paid for her counseling herself with the money she earned working for a gas station.

Maureen believes that the culture of a society impresses itself on teenagers in a way that they don’t necessarily understand. In the 1970’s the American culture was a bit lost, and there was a sense of despair, due to immoral leadership, the Vietnam war, and Watergate, and Maureen’s journey seemed to mirror that to some extent.

Looking back, Maureen realizes that some of the things she had to face were very hard, but she wanted to give something back and touch the hearts and minds of other teenagers. Her book is a public confession and she has written it in the hope of helping other people.