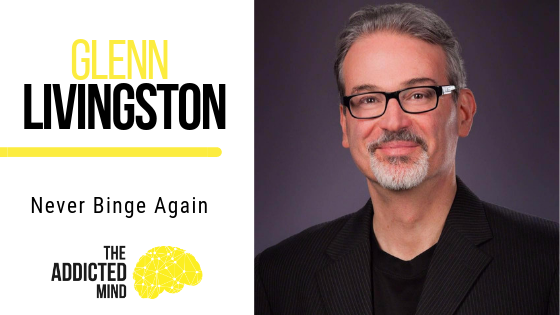 On this episode of The Addicted Mind podcast, we are joined by Glenn Livingston, a psychologist, marketing consultant, and former binge eater. Glenn’s issues with food began during his childhood and continued progressing through adolescence until he developed very serious health problems and his doctors told him that he needed to make a change. Coming from a family full of psychologists, he started out going the psychological route, but he didn’t break through until he had a couple of realizations that led him to create an unconventional road to recovery.

The first thing he realized was that people gravitate towards binging different types of foods based on their mental state. He organized a study with 40,000 responses that described the connection between foods and circumstances: chocolate is the drug of choice for people who are lonely or brokenhearted, salty and crunchy foods appeal to people who have stress at work, and chewy and starchy foods are relatable to people who have stress at home. Through this study, he realized that the emotions people were experiencing were not the problem, but they were the justification for their binge eating.

The second realization in Glenn’s journey was that the food industry was scientifically developing highly palatable foods and stripping out the nutrients, almost guaranteeing that their products would be addictive without the consumer ever feeling satisfied. This solidified in Glenn’s mind the fact that he would have to take charge of his own eating habits, because the industry was not doing him any favors.

Glenn’s commitment to taking charge led him to a practice that may be frowned upon by some in the psychological community, but it delivered exactly the results that he was striving for because he was in the driver’s seat. He began keeping a journal that contained an inner dialogue between Glenn and the “pig” inside him that squealed for the pig slop it wanted to eat. He made clear rules for himself about what foods he would and would not eat and when he would and would not eat them. This removed the opportunity for slip-ups because he had made his own decisions about foods that were off-limits ahead of time. Using this method, he lost 80 pounds, and when he shared this method with one of his colleagues, his colleague lost 80+ pounds as well. That was when they decided they needed to publish the “Never Binge Again” book, which has over 600,000 downloads to date. Glenn provides this and other resources such as food plan starter templates, sample rules, and testimonials for free on his website.

Finally, he encourages listeners to take charge of their own situations and come up with creative solutions to get where you want to be.

Connect with The Addicted Mind: