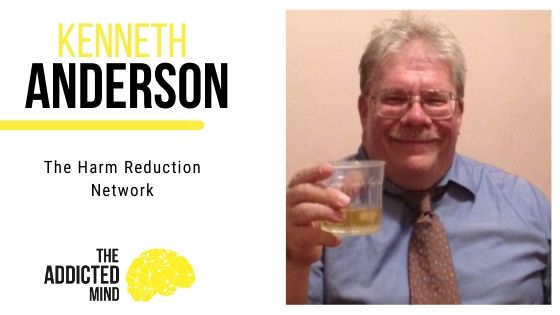 We have Kenneth Anderson, from HAMS (Harm Reduction Abstinence and Moderation Support) and the Harm Reduction Network with us today. He will be talking about harm reduction, what that means, how that differs from traditional forms of treatment (like twelve-step abstinence models), and the way that the harm reduction model can help people who are not yet ready for, or not willing to practice total abstinence, but would still like to change their drinking habits.

Kenneth is the founder and CEO of the HAMS Harm Reduction Network, a free-of-charge support group for people who want to make any kind of positive change to their drinking habits, from safer drinking to reduced drinking, to quitting altogether. There are seventeen elements to the HAMS program, which are all optional and can be done in any order. Although HAMS is an alcohol-focused group, they don’t stop anyone from talking about any other addictions or problems that they may have.

HAMS has a handbook, called How To Change Your Drinking, which was written by Kenneth. The book was published ten years ago and about 22,000 copies have been sold on Amazon.

Kenneth used to drink a lot and he was getting into trouble as a result. He tried turning to several different groups, Alcoholics Anonymous included, for help but they did not work for him. He tried Moderation Management for a while, and while he was there, he developed the Harm Reduction approach. He was fascinated by the concept of harm reduction and began volunteering at the Needle Exchange Program in Minneapolis. There, he learned a lot and it completely changed his perspective. He realized the importance of encouraging every positive change.

The problem with abstinence models is that they are perfectionistic. So any improvement that anyone makes, apart from abstaining entirely, is not deemed to have any value whatsoever.

The Harm Reduction Model is about every positive change and it is a very pragmatic model in the United States. It was started in Holland, when drug users decided to do something to help themselves, and decided to start handing out clean needles to prevent their friends from dying. This model used to be illegal in the United States and it is still illegal in many places.

In the broad definition of Harm Reduction, it also encompasses abstinence. It is about creating a better quality of life in the present moment.

There is research data available from the Rowntree Foundation, about people reducing their heroin usage from addictive to occasional use, although heroin is very difficult to moderate.

The National Epidemiological Study of Alcohol and Related Conditions, was done by the American government’s  National Institute of Alcohol and Alcohol Abuse.  It surveyed more than 40,000 people and it was found that about half of the people with alcohol dependence recovered by controlling their drinking and half recovered by abstaining.

Generally, about 85% of all the alcoholics who recover do it on their own. It sometimes takes a long time, but recovery from alcoholism through controlled behavior does happen.

Aversion Therapy was big in the US until the 1980s. There was a chain of about 25 Aversion Therapy hospitals, using conditioned taste aversion, or electric shocks, and there were no alternative treatments available at the time.

What sets the Harm Reduction Network apart from all other recovery programs is that they are willing to welcome and support anyone who wants to make any kind of positive change to their drinking habits. They have online groups and a forum on their website so that you can do all the work yourself, for free. They also have a very popular Facebook group.

Better Is Better is one of HAMS’s most popular models.

The National Epidemiologic Survey on Alcohol and Related Conditions (NESARC) Waves 1 and 2: Review and summary of findings – https://www.ncbi.nlm.nih.gov/pmc/articles/PMC4618096/