Episode 87 The Root of the Addictive Process with Alex Katehakis 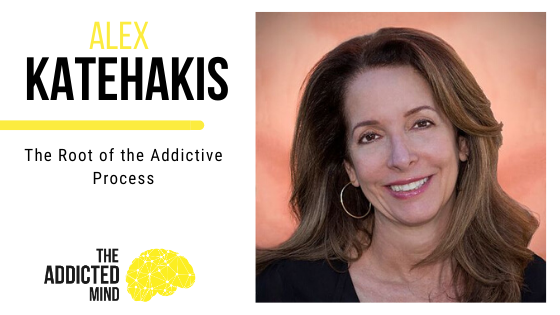 Today’s guest is Alex Katehakis. Alex is a Clinical Sexologist with a doctorate in human sexuality. She’s also the Clinical Director of the Center For Healthy Sex in Los Angeles, California.

In today’s episode, she shares her wisdom and insight about recovery and we have a great conversation about the root causes of the addictive process. We focus on the early developmental trauma and the way that it affects the ability to regulate our affect, and how addictive substances or processes are used to escape from those feelings.

Alex has always been fascinated by human sexuality. After practicing as a licensed marriage/family therapist for twenty-five years, she decided to dive deeper into human sexuality, rather than psychology.

In addition to human sexuality, Alex has also been studying with Dr. Allan Schore for the past twelve years, looking specifically at developmental neuroscience and how the early formation of the infant impacts on the developing brain, nervous system, and mind.

Talking about affect is referring to emotions. These emotions live deep within the body, and they only come forward when they are registered by the brain as feelings.

Dysregulated people say they don’t feel joy states, or they are super anxious, so they have to drink to make the anxiety go away. They may use sex to make themselves feel powerful or good about themselves.

Anything that we’re doing outside of ourselves to make ourselves feel ‘right internally’ speaks to affect dysregulation. Someone who is securely attached, and has a good heart-rate variability in general, doesn’t have to reach for anything to change their internal state or mood.

Love addicts, and some sex addicts, learned very early on that they had to get their needs met by themselves, so they used fantasy, which is a form of mild to moderate dissociation. This makes it difficult for them to connect to another person, as an adult, and to have intimacy or closeness. People often don’t know this about themselves until their lives become unmanageable.

As humans, we are highly adaptable creatures, so we can adapt to just about anything, even something dysfunctional that feels better than the problem we’re living in. This can create patterns that are difficult to change.

Change is possible, however, it takes time.

Willpower is difficult for people experiencing a lot of stress. It’s not the best way to change long-standing patterns that people have developed over time.

Long-term psychotherapy can help people feel into their bodies, and it allows them to feel the things they could not feel, as a child.

The therapist’s nervous system can soothe and regulate the nervous system of the patient in the same way as it would with a healthy mother and a child. This is known as a co-regulatory process.

With a healthy person, their brain circuits are all online and firing. With someone who has been abused, however, their circuits are not coupled. They are down. This creates a deadness at their core. It requires the care of other people to get their circuits to come back up.

Twelve-step programs help people change because they are inclusive and non-judgmental. As humans, we all need other people to survive.

In her book, Sex Addiction As Affect Dysregulation, Alex looks at the underlying mechanism that drives problematic behavior. It helps people to see sex addiction in a new way, and it offers hope for the people who are struggling with it.

Sex addiction is being recognized more and more by the scientific community as a bone fide problem. It was first recognized in about 1978, although people were talking about it as an affliction as early as in the 1800s. In 2011, the American Society of Addiction Medicine made a public policy statement, in which they included sex as an addiction. In 2018, a proposed diagnosis of compulsive sexual behavior disorder was established for the international coding book, the ICD.

Willpower can be used to show up to people who care, and in that way, it can help to heal from sex addiction.

Remember, it’s never too late to take a step in the direction of health!

To find out more, go to www.thecenterforhealthysex.com

Alex also has a Youtube channel with hundreds of videos from sex-experts around the world.