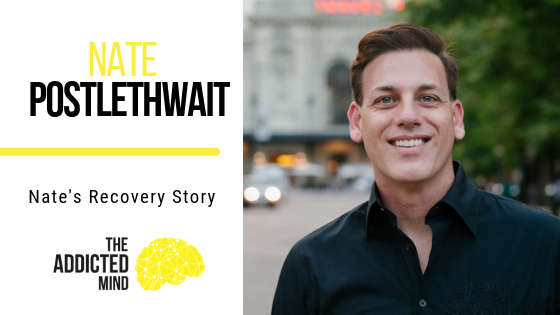 Our guest on this episode of The Addicted Mind podcast is Nate Postlethwait, who joined us to share his recovery journey. Nate grew up in a very religious environment in a rural southern town, which had a profound impact on his childhood and his eventual recovery from the trauma he experienced and his resulting sex addiction. Sexuality was never talked about, and he was the victim of multiple abusive encounters as a child, but it was not until his early 20’s that Nate realized that his compulsions were harming him. In fact, he came to understand that he was putting himself in physical danger due to his addiction which led him to feel tremendous shame. Acknowledging that he did not want his life to continue this way, he sought counsel and therapy within the religious community for several years, but he found that they were not equipped to address the biological roots of his trauma or addiction.

In his first week at a treatment center, Nate felt that he had covered more ground toward recovery than he had during the past 13 years of therapy, and he immediately felt validated. His therapy there explained the biological reasons why he had been acting with such sexual compulsion and that he was not broken or weak. This therapy allowed him to shift his perspective, alleviate the shame, and reinstated boundaries that had never truly been enforced. It provided his younger self with a voice to express the pain and hurt that he had been suppressing or trying to change through his addiction. By addressing the root of his trauma and addiction, he found that his desires were different, and he had the potential for genuine self-care for the first time.

Nate was able to build on the foundation that had been built during his time at the treatment center by taking a step back to evaluate his life and engage with himself to find who he really was without these strongholds. He made a few drastic lifestyle changes and realized that he was still in need of therapy, so he began doing intensive EMDR sessions which allowed him to grow and continue the recovery journey. He is still in therapy, and as a part of his journey, he has started a blog and a podcast to discuss the “taboo” topics of male sexual abuse, heterosexuality, and homosexuality in the religious realm, PTSD, and EMDR.