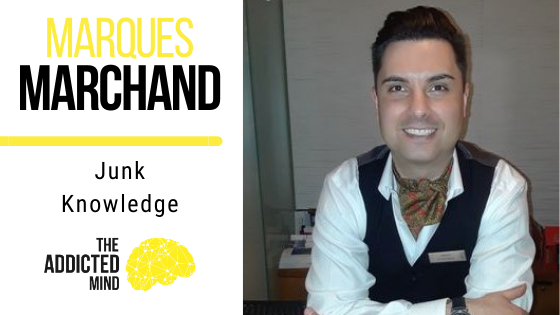 On today’s episode of The Addicted Mind Podcast, Duane talks to author Marques Marchand about addiction, dual diagnoses, and understanding your past.

Christmas 2009, Marques was working at a restaurant and woke up with flu-like symptoms. He hit rock bottom a year later, and decided to quit everything cold, right after Thanksgiving. He struggled to keep friendships and work, and eventually he snapped. From 2006-2010, he sought mental health advice from therapists.

His recovery process was long and arduous. Besides going to the ER every couple of weeks and racking up thousands of dollars of debt, he also discovered he was an alcoholic and had bipolar disorder type II. Now with a few different medications, the help of the 12-step programs, and better health practices, Marques has been able to free himself from the ups and downs of his addictive behavior.

Sometime in his 30s, while working as a concierge in San Francisco, Marques started writing and it took off. He originally started by just telling his story in Junk Knowledge, but he hasn’t been able to satiate the writing bug since. He loves the idea of working through his shame and helping other people to work through recovery by sharing his own story.

Marques is about to publish his third book, which is not about addiction, but rather about his time working in the hotel industry. He describes his time leading up to COVID and how that affected his industry. He works a full time job working for his uncle’s business, but now he also has a lot of time to help people in his neighborhood. The one thing he’d like to tell listeners is that the beginning of a healthy, successful life is to first reach out. “Don’t be afraid to be a fool for your life,” Marques says. Someone is going to want to listen to you and help. There are so many people going through the same thing. Take a chance on yourself for your own recovery.