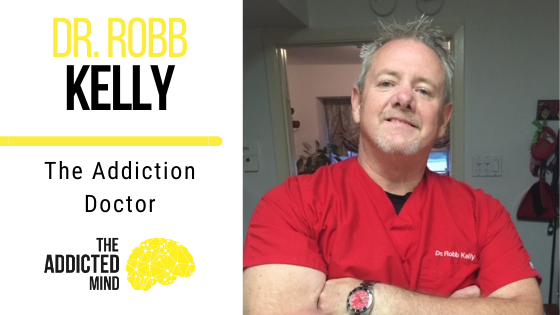 On today’s episode of The Addicted Mind Podcast, Duane sits down with Dr. Robb Kelly to discuss alcohol and opioid addiction.

Educated at Oxford, he drank through most of school. He was fired from his job as a police officer, which made him realize that his drinking was problematic. Unfortunately for Robb, it would take him losing everything to finally course correct.

Robb realized that the alcoholic mind preys on you. Toward his own story, he talks about committing suicide four times, two of which his heart actually stopped.

At his most broken moment, he started crying and realized that he couldn’t get over the alcohol on his own. He knew there was something different, which got him interested in neuroscience.

He knows that he was born with the addictive brain, and he has to be careful about his relationships as a result.

Robb talks about how his brain is wired differently, and the key to his success was realizing that. He started to notice the symptoms of alcoholism when he would buy a bottle and he immediately felt better. “For the alcoholic, the brain is telling them that they need alcohol to survive,” Robb says.

In his research, Robb found that we can change the way that we think. The neuroplasticity of the brain allows us to redirect our thoughts. We can literally change the direction of our most damning thoughts.

Robb also damns the medical research community for not prioritizing treatment of the disease. He says there’s no money in it and so the disease persists.

Moving to neuro-linguistic programming, Robb explains the role it plays in the addict’s mind. Back in the tribal days, Robb explains, a primal feeling used to wake cavemen up. But now, we don’t really listen to that feeling because we are driven by fear.

If you think you can’t do something, Robb says, someone put that there. And it’s not true. If you can’t visualize it, you can’t make it happen. You have to manipulate your brain to break down those barriers. “I don’t say ‘impossible’—I say, ‘I’m possible.’”

We don’t see ourselves as others see us, Robb argues, and if we did, we’d be able to do anything. You have to actually believe that your mindset is important. And stop living in fear.

Toward the end, Robb shares a story about visiting his friend and famed chef, Gordon Ramsay. At one point after dinner, Ramsay turned to Robb and asked, “do you know why I’m the best chef in the world?” Robb answered: “because you’re a damned good cook?” Ramsay replied, “because I tell everybody.”

There is so much importance in finding the people who live the life you want. They will inspire and propel you forward. Even through tragedy and difficulty, Duane says, it’s all in the mindset. And in the end, Robb says, you need to just take the first step.

16:45 — “The choice is removed for the alcoholic because you need it to survive.”

21:50 —  “The alcohol is the symptom. Alcoholism is a disease inside my mind that you can’t

24:20 — “There’s a difference between a Friday-night drunk and an alcoholic.”

42:45 —  “There is nothing that is impossible. Stop letting fear run your life.”