104 We All Play A Role with Daniel Snyder 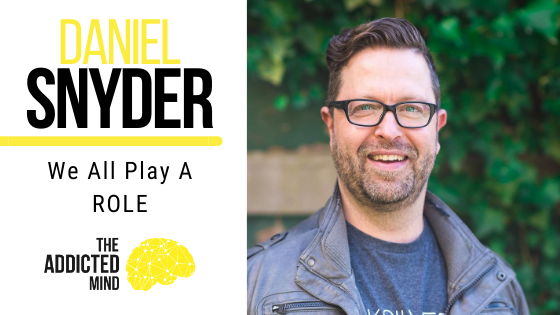 On today’s episode of The Addicted Mind Podcast, Duane talks with Daniel Snyder about decriminalizing drugs, the opioid crisis, and dealing with addiction.

Based in Vancouver, Daniel describes working through the opioid epidemic in British Columbia. He shares some stories that demonstrate that addiction is a hidden thing for many people; that is, it’s not always as visible as the media would have you believe.

He does believe that recovery is a process, which includes setbacks. Daniel initially believed that every relapse was a complete failure, but he soon figured out how to change his thinking around the recovery process. A friend asked him a pressing question that pushed him to realize he can learn through recovery. Overcoming the stigma of “once an addict, always an addict” was key.

In Canada, there is an in-depth data evaluation process for fentanyl. They are offering guidance even in the midst of COVID for people struggling with addiction, but fentanyl has all but “saturated” the drug supply at large. Daniel was fortunate enough to have gone through his addiction behind closed doors.

Duane and Daniel also discuss how people struggling through addiction actually need to be connected to people to be successful. The intervention method of breaking addiction is dismally effective because it pits people against the last people in the world that they could still be connected with.

Moving on to the politics of drug enforcement, Daniel discusses how people under addiction struggles are not free to just “decide” to get their act together, as the legality of it would suggest.

Daniel explains that many of the now-antiquated ideas around drugs that informed initial federal policy are backwards. The criminalization of drug use was not born out of a compassion for people struggling with addiction. He advocates for reform that would consider this.

The grim reality, he says, is that people ultimately die as a result of doing business with the drug dealer. It seems counterintuitive, Daniel explains, because we still look at drug use as criminal. In Mexico, a black market for alcohol popped up after the government shut down liquor stores in the wake of COVID. That market killed 100 people in a month from alcohol poisoning.

There is also a fear attached to what a world with legalized drugs would look like. Daniel argues that ultimately it would reduce crime, it would reduce death, and it would reduce cost to the public in the health and human services sphere. People are now looking at the potential benefits that legalization could offer.

If we can meet people where they’re at, we could actually save lives, Daniel posits.

04:25 — “If you’d walked past me, you wouldn’t have had the stereotypical thoughts about a

12:15 — “We are growing in our understanding of addiction all the time.”

21:20 —  “The consequences are less than the pain they are trying to escape from.”

29:55 — “When we prohibit something, a black market will inevitably spring up.”

33:05 — “The issue of legalizing drugs is too emotionally charged for you to look at

His organization is called We All Play a Role, Langley: https://www.facebook.com/weallplayarolelangley/