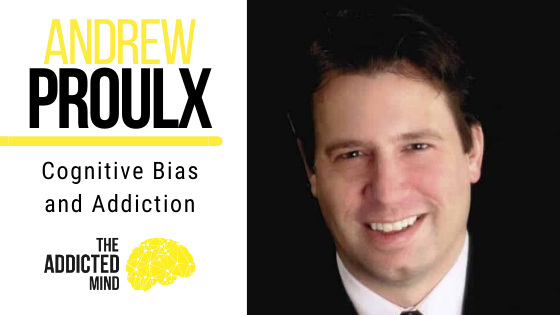 On today’s episode of The Addicted Mind Podcast, Duane talks with Andrew Proulx about the concept of cognitive bias and how this process works in the middle of addiction. Andrew also talks about his own journey with addiction in light cognitive bias.

Alongside his medical practice, Andrew ran a psychotherapy practice for 15 years before becoming addicted to alcohol and opiates. After hitting rock bottom, Andrew’s friends brought him to a 12-step program and a light went off that allowed for him. Being able to see that other people were able to get themselves out of the pit was huge. It’s crucial to understand that there’s nothing wrong with you, but that the symptoms of addiction are common.

Being able to recognize cognitive bias at all can help the addict, because it challenges you to think about the way that you’re thinking: metacognition or plain mindfulness. People ultimately want to know the why; they want to know why they think the way they do, and why their brain works the way it does

Andrew encourages people to be open-minded, which he recognizes is difficult. Creating a list of feedback from other people can help to defeat cognitive bias. The empty chair technique works to try to visualize the situation if you don’t have someone in arm’s reach to offer feedback. There are techniques you can actually use to challenge your cognitive biases, which can help you to overcome your addiction.

Andrew wants everyone to know that all are capable of a lasting recovery if they only accept the help that is out there.

Andrew breaks down three prominent forms of cognitive bias that

05:10 — The brain struggles to understand why it actively works against itself in addiction.

07:00 — Andrew describes how he managed to break his addiction and get into research.

13:00 — Andrew begins to discuss his research in cognitive bias.

18:05 — The distort belief system takes hold of the addict.

27:00 — The mistake of cognitive bias elimination.

12:20 — “People with addictions can rationalize anything.”

22:00 — “I get my clients to practice ‘remember when’ meditation to fight against this.”

29:10 — “When you explain these things to people, they want to know—they’ll listen.”

33:35 — “You’re never far enough into recovery that you are immune to the workings of the

You can reach Andrew at recovery.folio@gmail.com