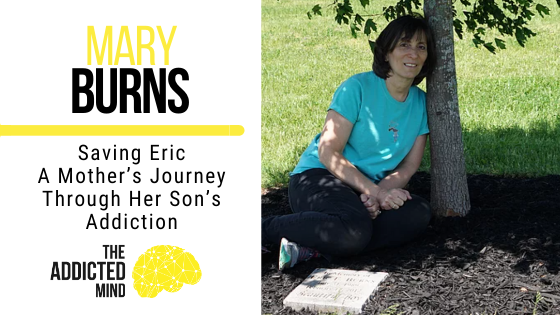 On today’s episode of The Addicted Mind Podcast, Duane speaks with author, teacher, and mother Mary Burns. During their discussion, Mary meditates on grief, loss, and her son’s struggle with addiction and mental illness.

As early as seven, Mary’s son, Eric, started to have something like screaming fits. She believed it was a phase that would pass. By the time he was a teenager, the screaming fits became “rages.” Looking back, Mary could tell that there was something wrong. The rages were extremely out of character. Eventually, he would turn to hard drugs.

After several months, Eric asked his mom for help. The hospitals, unfortunately, turned Eric away because they determined his addiction was not “severe enough.” In New Jersey, Mary was only able to get Eric checked into an outpatient facility with her insurance coverage. Her company only wanted to provide ten days of treatment after his first relapse. Perhaps, she muses, Eric would have been able to work through his addiction and avoid relapse.

Duane posits that the mythology of addiction is hurting our ability to really help people that are struggling in less visible ways. Four days before he died, he spoke of his strength through Jesus Christ. But for some reason, he took drugs, overdosed, and died. It shows just how insidious drugs are, Mary says.

Moving onto Eric’s death, Mary talks about how leaning on her faith really helped her to get through it. It gave her perspective to grasp onto the good times, despite all the loss. He struggled with life, but he let the good things reflect while absorbing the negative. She believes he’s in a better place, which is the little bit of hope she needs.

Since our understanding of addiction has moved from a moral issue to a genuine pathology, our attitudes have changed. But treatment has not kept up. Mary and Duane talk toward the end about how the protocol for addiction treatment needs serious reform to actually help the people that need attentive care. They need an intensive support network to really get them through it. The old philosophies come from old paradigms that misunderstand addiction. You don’t need to hit rock bottom, Duane says. There’s no such thing—you can get help now.

04:00 — “There’s a lot in addiction treatment that is lacking. It really needs to change.”

26:05 — “Maybe we wouldn’t have the drug crisis we have if people got the treatment they

34:20 — “Get your addicted family member into a long term treatment program and be

prepared to fight your insurance program on it.”

35:40 — (To the parents who have lost children) “The grief will never go away, but it does get