Episode 86 Treatment and Recovery from Chemsex Addiction with David Fawcett 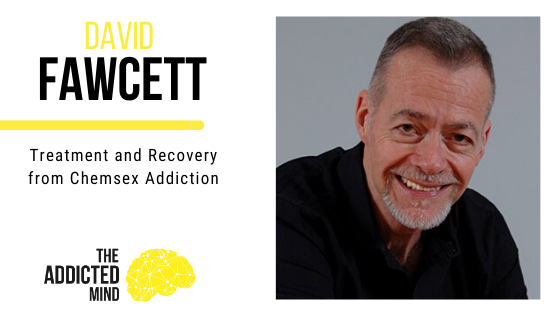 David Fawcett is our guest for today and he will be talking about chemsex addiction. He will explain what it is and how people recover when they fuse a drug addiction and a sex addiction.

David is a licensed clinical social worker and a sexologist (sex therapist). For the last twenty years, he has been working with men who have sex with men who use methamphetamine, other drugs, and high-risk sex. He has now developed an interest in what has become known as chemsex.

For years, people were coming to David, as a sexologist, with their sexual problems. By looking at their history, he noticed that the sexual problems were being caused by methamphetamine. And he realized that people were often seeking help for their sex problems rather than for their drug problems. This led to David’s discovery of the fusion between sexual behavior and drug use. And the devastation that it caused for the affected individuals.

People simultaneously using drugs and sex causes a fusion, or bonding, of neuropathways in the brain. This brings about a specific set of behaviors, making it necessary for them to deal simultaneously with both their sex and their substance addictions.

There is even a state, called anhedonia, where people are no longer able to experience any pleasure and life feels grey and depressing. This is often due to the brain shedding its receptors.

People who were a year or eighteen months clean were coming to see David. They had virtually no sexual desire because sex been so fused with their drug use that when they gave up the drugs, the sex went with it. This happens because of Dopamine, one of the neurotransmitters in the brain, that bonds actions and rewards together.

With chemsex, there is a high-level volume of stimulation coming into the brain. So the brain sheds its Dopamine receptors to control the level of stimulation that it is receiving. This can lead to depression.

Methamphetamine is neurotoxic. This means that it consumes and destroys the receptors in the brain. It can take several years in recovery for the neuropathways to recover.

Recovery from chemsex involves working with both the chemical and the sex sides of the addiction. David uses an abstinence-across-the-board model, combined with recovery plans for sex and substance addictions.

One of David’s goals is to re-integrate healthy sexuality back into people’s lives. Anything that gets people into their bodies and out of their heads speeds up the process.

Peer support is really valuable for recovery from chemsex addiction. Recovery is possible!