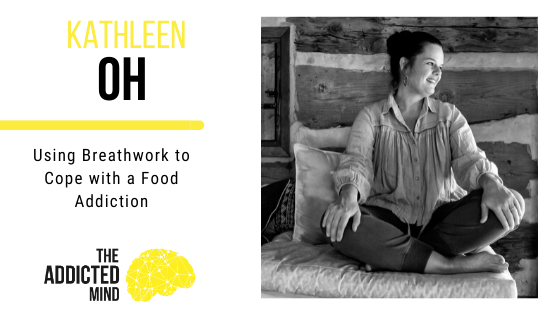 Kathleen Oh is our guest for today. We have a great conversation with her about breathwork, facilitating change, and non-ordinary experiences.

Kathleen is an Integration Coach, and her work started three years ago, in the foundation of her addiction, and her recovery. She had plenty of help from some great mentors and teachers along the way, however, it was ultimately the tools that she acquired for herself, in her journey out of her addiction, that got her to where she is today.

Kathleen has a food addiction. This was very hard for her, and although her addiction wasn’t obvious to others, it was clear to her that there was something profoundly wrong with her brain because she saw how she was continuously cycling through addictions with cigarettes, alcohol, and food. She was a binge-eater who used to eat secretly. She was obese, and her appetite for refined foods was insatiable, so she knew she had an issue with food but she did not realize at the time that it was an addiction. She thought it was an emotional need that she was trying to fulfill.

The specific foods that Kathleen cannot tolerate are refined. Due to their molecular structure, her brain takes in refined foods as if they are drugs like heroin or cocaine. It was a huge eye-opener for her when she discovered that by removing refined foods from her diet, she was able to access the non-ordinary experiences of a spiritual awakening.

Breathwork has resulted in some of the most profound experiences that Kathleen has ever had. She started her relationship with breathwork about twenty years ago, when she encountered Breath Therapy for the first time, and her facilitator became her mentor.

Kathleen’s addiction revealed itself to her three years ago, and she has been in recovery ever since. She now realizes that when she was overeating and drinking alcohol, she was trying to escape from her body.

Breathwork has allowed Kathleen to feel safe to be in her body. This connection to herself has given her something wonderful that she has never experienced before. Breathwork supported Kathleen in a way that she could accept the difficult moments in her life and power through them. Breathwork became a place of surrender for her, and this became the foundation for her recovery.

Although the method that Kathleen’s breathwork facilitator used was initially very challenging for her, it became the primary breath that Kathleen used at the time. It involves a sharp intake of breath, into the top third of the lungs, and the sound it makes can create a shocking feeling and cause one to re-experience past traumas that have been stored in the body.

Since then, Kathleen has learned and practiced many other breaths, many of which are gentler and just as effective as the initial breath that she learned.

Holotropic Breathwork is probably the most effective and best-researched breathing technique. It was developed in the 1960s by a psychiatrist called Stanislav Grof, who came to the US to do LSD research. When his research into LSD was terminated in the late 1960s, he continued looking for ways to bring about the non-ordinary state. He found that breathwork was as effective as LSD, and using yogic breath practices, shamanic journeys, and loud cultural music and drumming, he developed the Holotropic Breathwork system.

A non-ordinary experience can also be defined as an altered, or subconscious state. This state is outside of what we would normally experience in the container of our regular thoughts, feelings, and ideas. And pushing your mind beyond the normal experience gives you access to more information and allows you to be more creative in your thinking, feeling, and being. This state can be attained through meditation, yoga, certain prayer practices, and breathwork.

Kathleen would like to encourage people to follow their bodies intuitively.  Yoga, dancing, or breathing techniques can allow one to immerse oneself fully into the experience in a way that the body feels safe and comfortable.

The breathwork that Kathleen coaches and facilitates is intuitive and unguided. One of its premises is to inhale a lot more breath than you exhale, to build up CO2 in the body. This shuts down the default mechanism in the brain and allows people to connect with parts of themselves that have previously been inaccessible on a day-to-day basis.

This technique works very well for addictions because it allows people to access their inner truth, and see themselves in a different light. They can then work with their experiences with more resources than they had when the initial incident occurred.

It’s hard to be objective with ourselves. But with breathwork, we can have moments of clarity and truth where we can observe ourselves and make the connections.

Breath is our life source. Kathleen believes that breathwork is our highest power and something that everybody needs because it connects us to something greater and more powerful than we are. By practicing breathwork, we are creating a better version of ourselves which will ultimately benefit everyone.