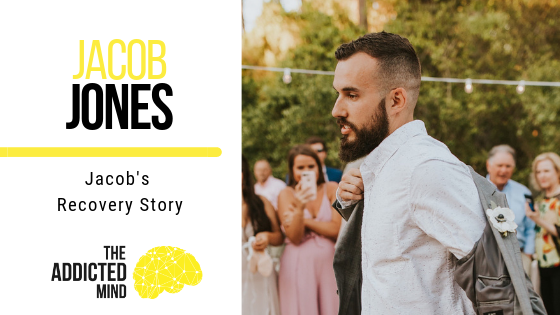 On this episode of The Addicted Mind podcast, Duane interviews Jacob Jones, author of the book “Recovered” and former opioid addict. Jacob has had a very turbulent but not uncommon path from addiction to recovery, and his insights into what drove his attitudes and behaviors over the years are eye-opening to anyone who has never personally experienced addiction.

Jacob grew up in Alabama, the son of a University of Alabama football player who spent several years playing professional football, so the desire to perform well athletically was instilled in Jacob at a young age. When he started playing football in 7th grade, it was clear that he had genuine talent, and the desire for acceptance and affirmation through achievement essentially became his first addiction. He was given the scholarship to play at the University of Alabama – a dream come true – and before he even took the field for his first practice, he was already dreaming of playing in the NFL.

During his first season, he tore his quad 6 times and had to redshirt his freshman year. Being unable to perform athletically due to these injuries exacerbated the depression and anxiety that he had been medicating with physical activity and achievement, so he began to have panic attacks and feel like things were spiraling out of control. During his sophomore year, he had to take a medical release from football, essentially ending his football career and any hopes of playing professionally. He got pneumonia that year and became addicted to the hydrocodone cough syrup he was prescribed.

The confluence of all of these factors led to Jacob’s compulsive behavior of getting his hands on as many opiates as possible just to feel ok. He realized that he had a problem when he tried to stop taking the pills, and he experienced withdrawals. That day, he called his mom and told her everything. He went home and went through a 30-day rehab program, emerging with a renewed resolve to not get into drugs again. He justified increasing his drinking habit by saying that it wasn’t drugs, but before long, he found himself clutching opiates again.

He was arrested for possession and went through a year of drug court, never convinced to stop doing drugs but rather convinced not to get caught again. As soon as his drug court was over, his addiction quickly became all-consuming, and he began to burn relationships with his friends and family in pursuit of getting his next fix. This cycle became exhausting, and he was drowning under the weight of the shame and guilt resulting from how he was living. By this point, he was taking excessive amounts (perhaps fatal amounts) of opiates, benzos, and hypnos, and while he was not exactly suicidal, he would have been alright with not waking up the next morning.

When he reached this breaking point, he gave all of his drugs to his parents and tried to break his addiction cold turkey. He suffered a psychotic break and was admitted to the CCU due to his dangerously high heart rate. He was then sent to the psych ward where he “came to” and realized how out of control things had gotten. After significant advocacy from his parents, the doctors finally released him after 3 weeks there. Just 4 months later, he took a job as a manager of a restaurant, and due to the intense stress and detrimental environment, he ended up getting wrapped up in opiates once again.

At this point, his family had been trying to help him for 8-10 years, and despite their unconditional love for him, it was becoming unhealthy for them to continue supporting him. Jacob remembers being shaken to the core when his aunt told him that his family was not always going to be there unless something changed. He immediately went to a rehab facility in Florida, overcoming his fear of admitting he had a problem and reaching out for help. He started a new life there, finally being able to identify his feelings for the first time and finding a community of fellow recovering addicts who he could relate to and grow with. He realized that he was not alone and that he had good within him.

Now, Jacob is 3 years sober, and he is dedicating to helping others who are struggling with addiction by sharing his story. While he would never wish his situation on anyone, Jacob recognizes his journey as the biggest blessing imaginable because he can relate to so many people and share hope with them. He is now very involved in his church and participates in mission trips where he can share his story and just gain perspective on the world.

To anyone struggling with addiction, Jacob’s message is: You are valuable and worthy. Your life right now might seem unfair and hopeless, but you can make the choice today to reach out for help. Your worst day can become your best day.