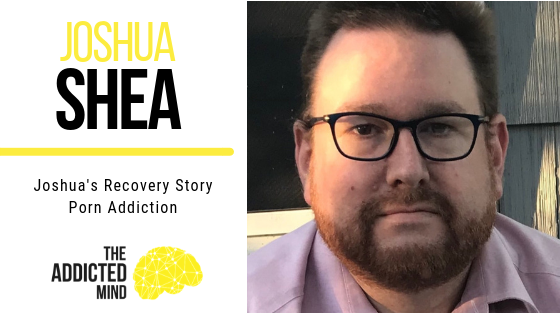 Joshua remembers that things began spinning out of control when he was struggling to keep up with work and his public service, so he took himself off of his medications for bipolar disorder to have more time and perceived clarity. Instead, his consumption of alcohol and porn exploded and became uncontrollable, which magnified the unmanageability of his life situation. He had learned during his 20+ years of addiction how to get away with things, but he knew at this point that something was going to get him. He began to have dreams about childhood memories that he had repressed about abuse and trauma that he had endured.

On March 20, 2014, the Maine State Police knocked on Joshua’s door and arrested him for child pornography. Apparently one of the women that he had engaged in a porn chatroom was, in fact, an underage girl. He was immediately fired from his job, which he saw as a removal from one of the stressful situations in his life and was the beginning of his “clean slate.” He met with his lawyer after his arrest and finally realized that he had a problem with alcohol and porn. Although his life had been spinning out of control and he was mostly estranged from his wife and children, he had not recognized that he was an addict. He sees now that he would not have been receptive to anything less than getting into trouble with the law regarding confrontations, interventions, or conversations about his behavior.
He entered a rehab program at the recommendation of his lawyer with low expectations, but he was utterly amazed by the content of the program and his progress along the way, and he ended up staying in alcohol rehab for 10 weeks instead of the original 4. He began seeing a therapist regularly, which unearthed the repressed childhood traumas and allowed him to process them and how those memories had been affecting him for decades since. Finally, 22 months after his arrest, Joshua was sentenced to 6 months in jail. At this point, he had already completed rehab and began a new life, committed to recovering, so he spent those 6 months writing the first draft of his book. He also went through 7 weeks of rehab for pornography and then began working as a freelance writer, which allowed him the time flexibility to focus on his health and recovery.