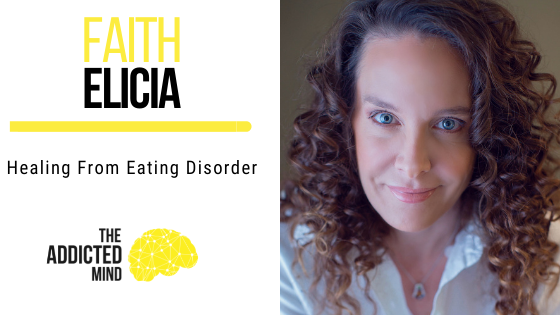 On today’s episode, Duane talks with Faith Elicia about her nine-year journey through an eating disorder. They discuss how she struggled several times to get help and how she finally found something that worked for her. They also talk about what helped her deal with not only her eating disorder but also with her anxiety, depression, and family history of addiction and family dysfunction. Faith’s story provides a lot of hope that, even when you feel at your worst and like you can’t go on, there’s still hope out there.

Faith comes from an addictive household, being a child of an alcoholic. She used to believe that all dads yelled. She was scared of all fathers and generalized that all dads are mean. At 16, Faith saw her dad drunk for the first time, throwing a chair while she was hiding under the table. Then, he sought help and got sober for 30 years until his death three years ago.

After she had her third child, Faith dealt with anxiety, panic, and agoraphobia. This was in the 80s and there wasn’t really an understanding of anxiety disorders at that time. She couldn’t tell anyone for fear they would lock her up in a psychiatric ward. Mental health just wasn’t talked about like it is now. Understandably, Faith was petrified.

She was very afraid of drugs and alcohol. However, impulsive compulsive behavior can come out in other forms. Food became her way of coping and dealing with her internal chaos. Faith’s anxiety disorder turned into an eating disorder. It wasn’t until she started to incorporate a mindfulness practice that things shifted for her.

[16:26] – “It’s very important for someone who thinks they have an eating disorder to seek help from someone who specializes in it and who really understands it.”

[19:21] – “This is a journey of self-awareness, self-discovery, retraining my thoughts filling that void that was always inside with self-care.”

[32:34] – “When the eating disorder voice is trying to distract me, it’s from some feeling or situation that I don’t want to deal with.”

Do You See What I See? by Faith Elicia