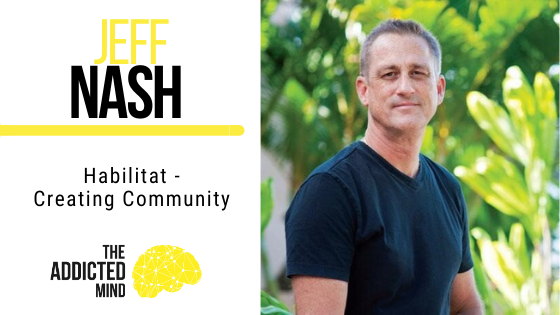 On this episode of The Addicted Mind Podcast, Duane sits down with Jeff Nash to talk about addiction, recovery, and the importance of finding and engaging in a recovery community. Jeff is the executive director at Habilitat in Hawaii.

Raised in Dallas, Jeff struggled with drug addiction for most of his adult life. By the time he was sixteen, Jeff was shooting heroin and other drugs. By 30, he finally was in the right spot to get on top of his addictions. While staying at Habilitat, he was trained under their philosophy and now runs many programs. He talks about having gone through fourteen different treatment facilities—mostly at the behest of his parents. It took being in jail at 29 and quitting methadone cold-turkey to see that he couldn’t continue to live this way as an addict.

He saw a model for change at Habilitat, even though getting out of jail was the initial motivator. Its different approach than medical treatment centers attracted Jeff because they treat the individual. Their methods changed the way he thought and ultimately prepared him for life.

As far as how it looked different, they gave him a sense of belonging. The socialization perspective was not medical but rather behavioral. They have this element of treating the criminogenic needs, Jeff says. Habilitat addresses by teaching people how to interact with other people healthily. Habilitat is big on emotional intelligence, including how to respond and how to react in an emotionally mature way.

Jeff says, “for those of us that continue to struggle, we may need to look for long-term treatment options.” He urges the listeners to continue to work at it. He quotes his late father: “you’re going to quit using drugs one way or another.” It fell on deaf ears at the time, but he realized that it was ultimately up to him to prevent drug use from taking his life. He wants all the listeners to know that change is possible, and there is help available.

6:00 –“Watching life pass me by is what convinced me to put this in motion.”

8:40 – “The only alternatives were to die to face long jail times.”

15:00 – “What Habilitat offered was a sense of community, a sense of belonging.”

24:15 – “Emotional intelligence is not that common in the world these days.”

28:50 –  “Typically, if people come to us and are up for that kind of commitment, they are ready

32:30 – “Any treatment is better than no treatment, but you need to find what works for you.”