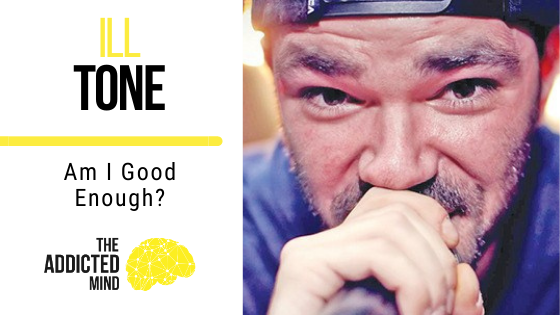 On today’s episode of The Addicted Mind Podcast, Duane talks to hip-hop artist Chris Hamilton (aka “ILL TONE”) about the struggle of addiction and the joy of recovery.

He struggled with social anxiety and wrestling with his sexual identity while amongst conservatives on Vancouver Island. He found hip hop after getting expelled from school and identified with the fact that they talked about struggle.

Duane and Chris talk about the fellowship and the validating aspect of group therapy. To be able to speak honestly, as Chris says, frees you from feeling like a monster. It helps to know that you are not alone.

He started on cocaine around age 15, even though he had previously told himself that he would never do that. After his third car accident at 19, he felt so bad about it that he decided to commit himself to a residential treatment. He relapsed with weed in the parking lot after getting out of the treatment facility. Before long, he’d returned back to using daily.

Over time, he started binging on the weekend instead of using every day, which freed up some time for him to focus on building his skills, finishing school, and working on his future in music. His music has been helpful, but Chris talks about how his group is the most important aspect to his recovery. Having access to a bunch of people who understand the struggle and can offer in-person support is the most helpful tool in his belt.

Chris’ addiction prevented him from being able to feel and enjoy his life fully. Chris says to grow your network. It doesn’t matter what your problem is, you can find people that are going through what you are. And these people will support you and help you to overcome your addiction.

03:15 — “I found out right away that the powerlessness aspect of my addiction was prevalent.”
05:10 — “I was angry, shy and reserved when sober, but fun and outgoing when I wasn’t.”
06:40 — “Half of street youth in the US are of the LGBTQ community.”
09:35 — “It’s not like dudes in their teenage years just get together and talk about their
feelings.”
22:00 — “A Norwegian woman offered me a beer after two and a half years of abstaining.
within two weeks I was back in Canada doing crystal meth.”
25:05 — “I’m becoming more fully-human. I’m becoming more of myself.”
27:00 — “It’s not just myself‚ but my art has recovered as well.”