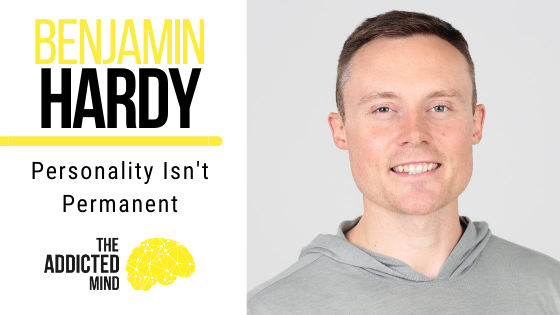 On today’s episode of The Addicted Mind Podcast, Duane talks with author Benjamin Hardy about his personal experience with addiction and the chaos that comes along with it. Benjamin describes the process overcoming his own addictions involved going through a “redemptive process,” which involved forgiving his father and rebuilding the relationship there. With trauma, you’re always looking in the rear-view mirror, but you need to make meaning going forward. Meaning is not going to strike you—you have to make it yourself. The beauty of this is that you can change the meaning of your past, Benjamin says. It’s key to have empathy for your old self.

Benjamin also talks about how writing about your trauma can really help. Turning away from the past, you can have hope for the future. Without a hope for the future, Benjamin says, the present becomes meaningless. You can also choose to ascribe a meaning to your past. We call it “meaning-making,” Benjamin says. Part of becoming emotionally-developed includes this idea of choosing the meaning of your past.

He shares a story about how you can actively work to a solution for something that didn’t go exactly how you planned instead of snapping to a quick decision. You can choose to frame it in a new way instead of being defined by a failure. Choosing the meaning going forward can change how you store that forever. In his story, Benjamin points to the fact that he was vulnerable enough to share his feelings with the people in question as part of the process.

07:55 — “While I was running, I think I was subconsciously building confidence and thinking about my future.”

16:45 — “We get stuck remembering the past rather than imagining the future.”

29:45 — “You shorten the refractory period by taking action.”

41:15 — “There is potential for you to look back at this thing you’re going through and be