Episode 84 The Rising Cost of Rehab with German Lopez 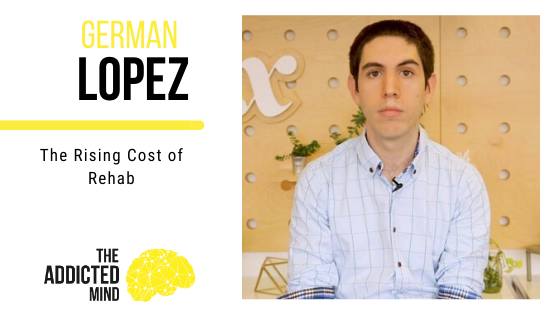 Today, our guest is German Lopez. German a writer and he is currently doing a project called The Rehab Racket, which involves looking into addiction treatment, exploring some of the issues associated with it, and bringing them to light. This challenges the addiction treatment community to provide the very best care for people who are suffering from addictions.

German is a senior correspondent at Vox.com. Before, he was writing mostly about drug policy and criminal justice issues, but for the past few months, his focus has been on The Rehab Racket project, which was created to investigate the cost and quality of the treatment that is available for addictions in the United States. At this point, German has received more than 1100 submissions from patients and their families.

For the last few years, German has been researching and writing about the opioid epidemic. He saw that policy-makers had been making an effort to put more money into addiction treatment, which is something that activists had been calling for, for quite some time. This information initially seemed contradictory to him because addiction is hard to treat, and there was a general understanding out there that much of the available treatment was inadequate, not evidence-based, and not really helping a lot of people.

German wanted to make sure that the money being poured into addiction treatment was indeed going towards something worthwhile and effective. So he started talking to families, to ascertain whether or not he was onto something. This is how The Rehab Racket project came about.

It seems that the idea that people who use drugs and go through addiction treatment are under-represented overall in the conversation, has changed in recent years, particularly with the opioid epidemic. This is what motivated German to want to hear directly from the affected people. Also, to truly reflect how well addiction treatment is working, he needed to reach out to as many people as possible. This is why there is a survey form on German’s website for people who have gone through the system to fill out, talk about their addiction treatment, and help shed a light on this part of the health-care system.

Hearing from people who found a treatment that worked for their addiction, and got them into recovery, who had spent thousands, and sometimes even tens or hundreds of thousands of dollars on that treatment was alarming for German. The American health insurance system is supposed to protect people from these catastrophic costs, and in a lot of cases, the insurance is not doing that due to the many barriers that are involved.

For a long time, society neglected this particular area of health care. There were initially no places that provided treatment for addictions, so that forced all the assistance to come from community groups, like AA and other twelve-step groups.

Treatment for addiction is still a relatively young field, it takes good research to make a good change, and we are still learning about the most effective ways to help people who are struggling with addictions. However, many treatment facilities don’t track their outcomes and many of the surveys that are done around addiction and recovery are of very poor quality, so it’s difficult, at this stage, to know what kind of treatment is the most effective. But, based on the data that’s available from the federal survey of treatment facilities, there seems to be more push lately to find out more about this particular field of health care.

Often, issues of addiction, and issues like eating disorders, tend to overlap and may need to be treated simultaneously. This is challenging in terms of the kind of treatment that is currently available.

It’s difficult right now to find a facility that’s the best fit for everyone’s specific needs. Shatterproof would like to alleviate that issue.  It’s going to be a system like Yelp, but for rehab, to give an overview of the facilities and services offered by each treatment center.

Telling your story is cathartic. It assists with the recovery process.