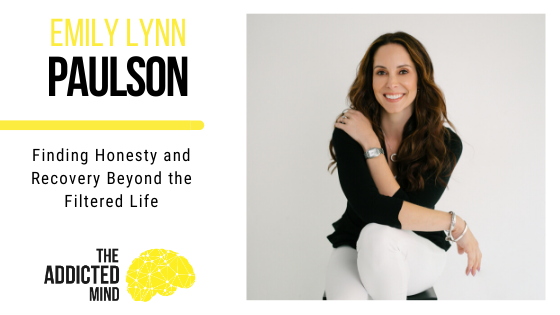 Recovery from addiction is a particularly challenging process for women, who are also mothers, to go through. Emily Lynn Paulson, author of the book, Highlight Real: Finding Honesty and Recovery Beyond the Filtered Life, is our guest for today’s show. She shares the story of her addiction and her journey along the path of the process of recovery and healing.

Emily lives in Seattle and she’s is the mother of five children. She has been sober for three years now, and she is a certified, professional recovery coach.

Emily used to dislike herself a lot. She had difficulty with being honest, both with herself and with others. From a very young age, she used to tell white lies to cover up the things she didn’t like about herself and to make up for the things she thought she lacked.

When Emily started drinking, it helped her to cover up, and make up, for the things she didn’t like about herself or that she thought she lacked. The first time she ever drank alcohol, she realized that it affected her differently to the way it affected her peers. Rather than just having fun, when she drank, she felt that she was finally the person she was always meant to be. This theme wove its way into different areas of her life and followed her until she found recovery.

When she was younger, it was hard for Emily to make the connection between alcohol and her problem because back then it was still relatively easy for her to hide things from other people. Bad things didn’t happen every time she drank but every time something bad happened, she had been drinking. At college, her problem was easy to hide because everyone was drinking all the time and her behavior didn’t appear to be any different from that of anyone else.

As an adult, Emily had five children and she didn’t drink while she was pregnant. So she continued denying her problem for quite some time until the consequences of her drinking finally started outweighing what she thought she was getting out of it.

Emily didn’t believe she was an alcoholic at first because she thought she could stop drinking. She made several attempts to stop but she always started again. Deep down, she knew that she had a problem but she was not willing to let it go forever. That is alcoholic-thinking, and it is very common. Eventually, it got to the point where Emily could no longer deny her alcoholism.

All the dishonesty, secrecy, and lies of omission can make addiction a soul-crushing condition. Other people are often not fully aware of what is going on, so they don’t step in and offer to help.

Although Emily came to realize that dishonesty didn’t work, it was still very hard for her to become fully honest. She found that coming out with her sobriety, and also writing her book, helped her to make the connection and become truthful about who she was, and about the things she still needed to deal with. She knew that she could not start afresh without first dealing with everything that had come before.

It’s very easy to give a false impression of what is going on in our lives with social media. And many people fall into the social media “comparison-trap”.

Having to confront her kids with her alcoholism was the most difficult part of recovery for Emily but it was also her biggest blessing because it brought about some very necessary conversations.

Alcohol is not something that women have to do to survive their kids. For Emily, her book is an important message to women, telling them how necessary it is, to tell the truth to other women about what alcohol does to mothers.

Since Emily started putting her sobriety first, she has been able to be there for her family in a way that she has never known before. Her life has become so much better. She’s not perfect now, but her best day when she was drinking was always way worse than her worst day, sober.