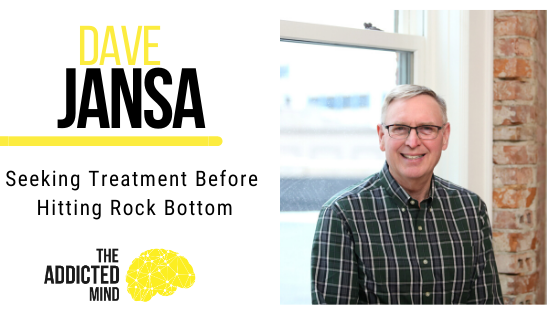 Today, Dave Jansa, of We Face It Together, talks about how he helps people get through a part of addiction treatment that sometimes tends to be overlooked. There are some people who suffer from addiction who have not necessarily hit their rock bottom. So, although they realize they have a problem, they have often not yet suffered the all big consequences of their addiction.

Dave offers coaching, to help these people change their thinking about addiction and to help them change their addictive process before they have to face the deep consequences that are normally associated with addiction.

Sixty-four-year-old Dave was born and raised in South Dakota. He comes from a big family where addiction was rife. Currently, five of the eight siblings in Dave’s family are abstinent from drugs and alcohol.

Dave started drinking alcohol when he was in high school. He also became a heavy marijuana smoker at the time. This curtailed his education because he quit college after his first semester and he went back to work full-time.

Dave stopped using marijuana in his early thirties, after many attempts at moderation, and he is currently thirty-two years alcohol-free.

During his mid-forties, Dave began to become intensely curious. With the advent of the internet, his curiosity led him to immerse himself in the very confusing landscape of the issues of addiction that he and his brothers had gone through. As a result, he retired early from his very good and long-term sales position and threw himself into the world of addiction.

Dave started volunteering for a local community organization, which eventually became a very innovative organization that was doing things differently and breaking down barriers. He was a great fit for the organization and has been with them ever since then.

A big flaw in an already flawed system is that our entire culture, including some people in the addiction-care world, is saying that some people with addictions, whose lives have not collapsed completely, are not yet sick enough for recovery.

Seeing his brothers transform before his very eyes made things very logical for Dave. He did not have to wait until everything fell apart to recover. He could also do what his brothers had done, and turn his life around.

Dave had no doubt that, although he was low on the spectrum, he was still an alcoholic. At Face It Together, he first went through a protracted trial-and-error process of harm reduction, trying to curtail his drinking. It didn’t work, so he decided to go for long-term abstinence.

We are very intentional about language at FIT.  We really don’t find much value in the word alcoholic.  I (and most of our clients) do not comfortably identify with the word, rather, someone with addiction.  My alcohol trial and error process started in my late 20’s and ended when I was 32.

Addiction is known to be a chronic disease. The pillars of chronic disease management are to detect it early and to deal with it as quickly as possible. This makes chronic diseases easier to treat but most people don’t think of doing this with addictions.

Dave firmly believes that people, who are clearly showing signs of what he refers to as ‘pre-addiction’, would do well to have a non-judgmental conversation with a health practitioner in a clinical environment.

At Face It Together, they offer non-judgmental peer coaching. They never tell people what to do. They rather make suggestions. They often initially assist people towards a harm-reduction protocol, which is on the way to recognizing and dealing fully with their problems of addiction. Sometimes people with addictions simply need to recognize that it’s normal to first want to cut back on using, before going for complete abstinence.

At Face It Together, they knew that peer conversations were powerful. They employed science and embraced harm reduction and motivational interviewing. They also expanded on this and developed a tool called Recovery Capital Index, with which they can accurately measure someone’s addiction wellness. This tool has been validated as an instrument, by Sanford Research, in South Dakota. This has been published in the South Dakota Journal of Medicine.

At Face It Together, they work hard on people’s behaviors and they have conversations with people about their journey. The Recovery Capital Index shows them where people are doing well and where they are not doing well.

Today, Dave feels exponentially better than he did during the sixteen years that he was using alcohol.