96 Journals from Cloud 9 With Tyler Farnham 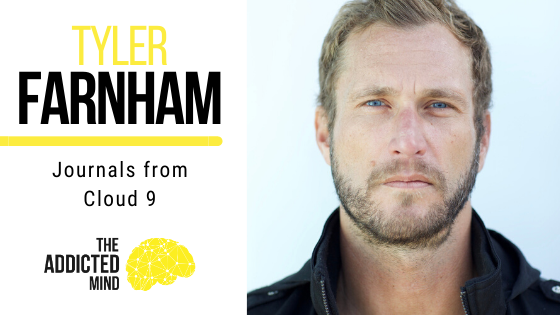 On today’s episode of The Addicted Mind Podcast, Duane speaks to Tyler Farnham about his skydiving accident and his subsequent journey through addiction and recovery. Tyler says that having goals and making active decisions about who is in your “circle” can change your life.

Originally from Cocoa Beach, Tyler now lives in Bali. Even before his accident, Tyler had already dabbled a little with pain pills in the form of 20mg Percocets. After becoming somewhat dependent on them, Tyler found it harder and harder to get off of them. In a leadership position as a lifeguard, he felt the call to give up the pain pills. It was around this time that Tyler realized that the company he kept mattered. When he was 18, Tyler started jumping out of airplanes. He jokes about being addicted to it, but in some ways he feels he really was addicted to the rush, anyway. In the crash, he shattered his right femur and they almost had to amputate. His left femur broke. He shattered his jaw, fractured his skull, and lost nine teeth.

He was placed in a five-day medically-induced coma, and he woke up on his 26th birthday. On a morphine drip and in excruciating pain, Tyler was confined to a wheelchair and even had to attend speech therapy during his recovery. He had to have his mouth wired shut. Depression set in and it started to feel impossible to see the hope in his situation. Tyler started to journal as a means of keeping up hope. It helped him to track his progress and feel some sort of hope and motivation. Having something to do that’s physically active helped Tyler to overcome the dependency. The natural endorphins you encounter can boost your positivity. He encourages others to find the same. Tyler shares a story about how his inability to refill a script affected his mood so severely that he felt he couldn’t even do his job. Because he didn’t want to hurt people, he decided to try to find a solution. This is when he decided to seek treatment. Put on Suboxone initially, Tyler started to work toward changing his life.

Tyler’s message to someone struggling with addiction now: reach out to someone. And write things down. The importance of this cannot be overstated. These are small promises to yourself. Keeping them can give you the motivation to keep moving forward.

01:55 — Tyler introduces himself in the context of the prescription drug epidemic.

06:00 — Setting a goal and surrounding yourself with people on the straight-and-narrow are key.

07:30 — Tyler shares the story of his skydiving accident.

17:00 — How it would be difficult to transition from extreme sports to virtual non-mobility.

19:45 — Asking for support through addiction is one of the most difficult things to do.

28:30 — When Tyler realized that he was dependent on his pain medication.

40:35 — Our past hardships can frame our current ones.

— “I realized I couldn’t go anywhere if I didn’t step away from the Oxycontin.”

— “During those traumatic experiences, your brain oftentimes just shuts down.”

— “Think about the little things every day that show progress.”

— “Ten years later, a lot of them are either dead or in jail.”

— “When you stick to those habits… you start to become addicted to good habits.”