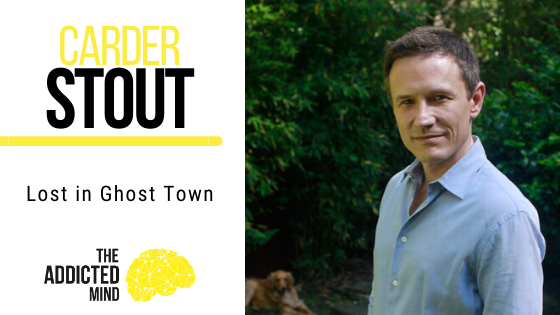 On today’s episode of The Addicted Mind Podcast, Duane speaks with author Carder Stout about his book, Lost in Ghost Town, the story of his addiction and recovery. Duane also addresses the difficulty of the ongoing COVID-19 situation by starting a campaign of stories trying to spread hope in a time of darkness.

Carder grew up in Georgetown, where his father constantly worked and his mother was an alcoholic. From an early age, he had feelings of disillusionment and worthlessness. By the time he was 11, his parents had divorced, securing the disarray in his home. By twenty, he’d already gone through eating disorders and was living on cocaine in New York. He thought that moving to Los Angeles would help him distance himself from the people he knew and his addiction, but in Venice, the epicenter of crack at the time, Carder’s addiction spiraled. Carder meets a drug dealer in Venice named Flynn, who, with his grandmother Beatrice, actually showed Carder the familial love that he never received from his actual family.

As a child, Carder experimented with drugs and alcohol as early as age 7. By age ten, he was regularly smoking weed, bein altogether unsupervised. He talks about receiving visions, for lack of a better term, from his grandmother, as frightening as that is. His grandmother, who was a clairvoyant in her life, ultimately became something of a spirit guide for him while he was high. While in the midst of dealing drugs, Carder talks specifically about being surrounded by guns in the culture. In the middle of a lot of psychological pain, he says that he could not stop the “loop” of obsession and compulsion, the things that kept his addiction rolling. In a lot of ways, Flynn became the person that loved him through the cycle of addiction.

In Santa Fe, Carder is accepted into a psychology school after getting out of in-patient care. He worked 2 or 3 jobs for almost ten years working on his degree. Now, he’s a practicing psychologist in Los Angeles. Part of his platform is pushing the idea that developing a sense of purpose is one of the first steps people can take toward a successful recovery program. Forgiveness also plays a vital role in recovery. Carder talks about forgiving his family and forgiving himself, and how that opens the door to freedom.

Carder carved out 4 hours a day, three days a week and set a goal to write. He found some hope in the writing process, which allowed him to tell his story and materialize healing. A publisher under Simon & Schuster picked up his book and he was able to do a reading before an audience before the COVID-19 outbreak. In his sobriety, he married and had two children, and he points to his life as living proof that addicts can recover. There is hope for those who actively seek support.

1:00 — Share your stories of hope with Duane at theaddictedmind.com/hope

15:30 — Drugs were ultimately a part of Carder’s journey.

24:30 — How trauma has the ability to inform addictions.

30:00 — Carder publishes his story, which becomes his legacy.