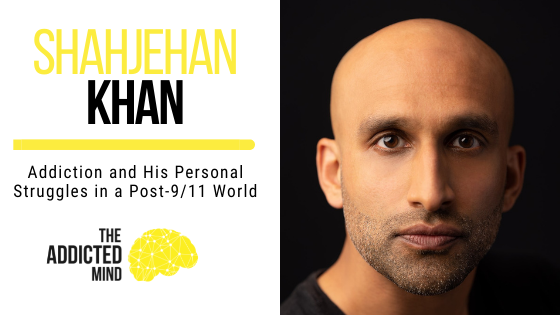 On today’s episode, Duane speaks with Shahjehan Khan, a voiceover artist, actor, and musician based in Boston. He is the host of the King of the World podcast, which explores his life as a Pakistani American Muslim in the post-9/11 era, 20 years later. Shahjehan shares how he weaved his struggle with addiction to cannabis, how all of that came together for him, and how he got into recovery.

Son of Pakistani American immigrants, Shahjehan grew up as an average American young person in the suburbs of Massachusetts. When 9/11 happened, he remembers being a senior in high school, sitting in a calculus class. At that time, he was already a struggling teenager, which also marked the beginnings of heavy substance use. By the time he got to college, he dropped out after a year, came home, and had his first suicide attempt.

He was then introduced to AA, but it really didn’t resonate with him. He had a relapse a year after he joined a band. Until he realized he had to make that change. Now eleven years sober, Shahjehan found therapy to be the one thing that has helped him through his recovery journey.  During the pandemic, he also found a community of recovering folks he could relate with.

It also made him realize it was okay to be a multifaceted person. At the time, he felt like there were a bunch of little pieces that never felt like a cohesive whole. When he was first approached to tell his story, he didn’t want to tell another 9/11-centered Muslim story because he was sick of it. Then he realized he could frame it in a coming-of-age way, being able to show the parallels of his own personal struggles with what was happening in his outer world post 9/11.

The King of the World podcast is shining light on the American Muslim experience. And seeing the impact it had on him and the people he interviewed is also important for us to understand and grow as a society.

[11:28] – “Doing the podcast in itself was an act of realizing that it’s okay to be this multifaceted person… there were all these little pieces that never felt like a cohesive whole.”

[11:40] – “A lot of people in early recovery feel like fragmented people.. it’s that process of that exploration.”

[21:09] – “We’re starting to finally become a voice for people in a way but it’s this complicated thing where I myself inside, I’m sort of using that as a crutch almost.”

[48:18] – “Find one person that you can be brutally honest with… and that can hear you out. And that’s where the healing can start.”

King of the World Podcast