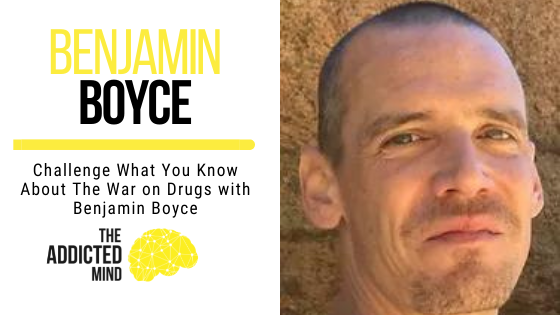 On today’s episode, Duane speaks with author Benjamin Boyce about his addiction story and how the war on drugs impacted his ability to better his life and live a meaningful life. The discussion dives deep into the war on drugs, how it can exacerbate the problems of addiction, and its impact on our society as a whole.

Benjamin is the author of Dr. Junkie: One Man’s Story of Addiction and Crime That Will Challenge Everything You Know About the War on Drugs and the host of The Dr. Junkie Show.

Benjamin was diagnosed with Asperger’s Syndrome (now part of the autism spectrum). Studies in the last 5-10 years have shown that people with Asperger’s or on the autism spectrum that use marijuana or other cannabis products show reduced social anxiety. However, he realized that criminality showed up right behind it because he had to hide the marijuana and not tell people about it. For him, becoming the bad guy was just self-fulfilling.

Like most of us, Benjamin grew up misinformed about drugs. It was misinformation that exploded into a lifestyle of crime and punishment. Benjamin was told he was a criminal so once he ran out of money, it was easy to start stealing stuff. He ended up shooting mainline injecting heroin and cocaine for four or five years.

Then this “war on drugs” that has put him in the system just made things worse. He went to prison in 2004 and spent some time in the largest walled prison on earth. Once out of prison, he found a loophole in the system’s full-time employment requirement by going to college. So he got a Bachelor’s and a Master’s and then he worked through getting his Ph.D. Benjamin is now teaching at Denver University and the University of Colorado. The latter has a recent program where they now teach degree classes to people in prison.

The zero-tolerance that the system has put in place is an antithesis of the help people need. When really, the goal is to get people in life, not just in a consistent loop of use.

The roots of the war on drugs

How we can become role models to our kids

Having a strong support network

Defining your own recovery

[07:14] – “Lots of studies nowadays, in the last 5-10 years, have shown that people with Asperger’s or on the autism spectrum that use marijuana or other cannabis products show reduced social anxiety.”

[11:11] – “It increases the likelihood of overdose when somebody gets out because you’re taking them at a moment of trauma, doubling that trauma, putting them in a hole and making sure they know the people around you don’t care.”

[13:38] – “We’ve built the war on drugs to make sure a victory looks like making sure the price of street drugs goes up tomorrow.”

[18:05] – “There’s a way to do this that leans into our humanity. But I think we’ve also got to keep it in the confines and the framework of what our culture demands.”

[20:51] – “Why are we spending all of this effort and energy fighting a 100-year old war that is largely against our own citizens who could all be, instead of costing us money, paying taxes, running businesses, and having productive lives?”

[21:41] – “There are other ways to achieve those same states that we use drugs to get to. You get preoccupied chasing the drug when you’re in an addiction loop. But if you can put that aside for a day or a week or a month or a year, the wound starts to heal.”

If you really enjoyed this episode, we’ve created a PDF that has all of the key information for you from the episode. Just go to the episode page at www.theaddictedmind.com to download it.

Dr. Junkie: One Man’s Story of Addiction and Crime That Will Challenge Everything You Know About the War on Drugs

If you like this podcast and are thinking of creating your own, consider talking to my producer, Danny Ozment.

Find out more at https://emeraldcitypro