Our guests for today are Mark Sheeran and Michelle Dunbar of the Baldwin Research Group. They have a thought-provoking conversation about The Freedom Model of addiction treatment, which is a non-Twelve Step, and non-disease model of treatment.

Mark is 49-years old. He is the chairman of Baldwin Research and he is one of the authors of The Freedom Model. Mark co-founded the Saint Jude Retreat, which is where The Freedom Model is taught.

Mark and Michelle both come from heavy AA backgrounds. Their families were both steeped in treatment and AA, so their research actually began when they were kids.

Mark was involved in a serious drunk-driving accident thirty years ago, at the age of nineteen. This made him realize that he needed to change his life. He was mandated into treatment and found that he disagreed vehemently with what they were teaching him because he did not believe that he would be an alcoholic forever. His treatment experience was so bad that he knew there had to be a better way. After completing eighteen months of treatment he decided to figure out a better way for people. Within one year, he coined the phrase “non-Twelve Step”.

Mark spent the next twelve years, doing research. He then met Michelle and they continued doing the research together, along with some others. Together, they developed the skeleton of what was to become The Freedom Model. The model was perfected over the next twenty years.

Mark met Michelle’s father at AA in 1989. Michelle approached her father for help with her drinking and drug use when she was twenty-two years old. Her father had been in recovery for about ten years at the time, and he no longer believed that he was an alcoholic. Michelle was intrigued by her father’s approach. He had a group of young people with whom he was doing research and so she unknowingly became one of his only female research subjects in his project.

Michelle’s father told her that she did not have a disease and she was not powerless. He explained that her problem was temporary and that she could be okay. This was a very new idea for her. She continued with AA for another seven years but she was always a heretic, trying to change it from within and telling people that they could be okay.

Mark and Michelle spent the first twelve years of the thirty that they were doing their research in AA, trying desperately to make it work and become more effective. But they were heretics at the same time. Where AA was saying that you never get over the problem, they were saying that you most certainly do.

According to Mark’s research, people do move on from their addictions. Over 90% of drug addicts, alcoholics, and heavy substance abusers move past the problem as they get older, whether they treat it or not.

With The Freedom Model, you have to undo the mythologies so that you become free to move on.

As a young person, the idea that you are going to struggle with your “disease” forever can be very daunting.

The Freedom Model debunks 23 of the grand myths that people are told about addiction so that people can make the choice as to the benefits of their using. Because people use because they like it.

The Freedom Model helps people question why they make decisions and why they are motivated to use, based on their behavior, their belief systems, and the myths by which they may be living their lives.

It is more natural to move on from addiction than it is to keep one. And it is much more natural for a human being to change than it is to remain static in a behavior. The key to recovery is to move the locus of control to the self.

Shame sits in the way of recovery.

At their residential retreats, people spend four weeks attending classes where they work with the 450 page Freedom Model curriculum. They don’t take away people’s cellphones and laptops or treat them like babies or criminals. It is a very conducive, quiet, learning environment. By the time that everyone leaves, the myths have been undone, they know that they can be free, and they have usually chosen either moderation or abstinence.

Life in recovery doesn’t have to be a daily struggle.

It all comes down to a choice that we make to deal with difficult experiences. Mark and Michelle help people by challenging their beliefs that a substance will help them to deal with stressful situations.

Mark and Michelle have both been there. They want people to know that they can move on from addiction because it’s not a chronic, progressive, psycho-social disease. You can become free to get on with your life and move past all of this and by actually understanding what is happening. 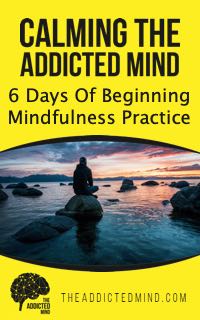 Sign up for the newsletter and support the addicted mind podcast. Start your mindfulness practice today!

You have Successfully Subscribed!