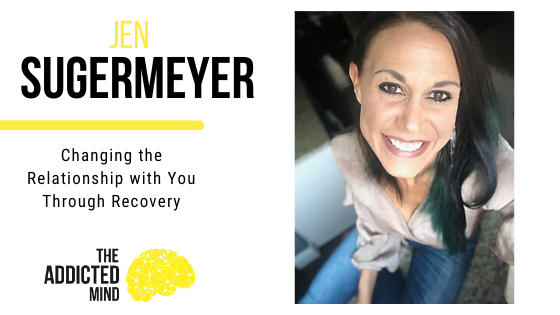 Today, we have a great conversation with Jen Sugermeyer. She shares her story of addiction and recovery, and she talks to us about overcoming her shame and her fear of reaching out, and how she managed to change her relationship with herself.

Jen grew up on the East Coast and she currently lives in Dallas, Texas.

Jen’s addiction started at the age of twelve, with an eating disorder. At the time, she did not realize that she was paving the way for her brain to become accustomed to satisfying her reward system.

When she reached her mid-thirties, she was an alcoholic and she had been trying to get sober for more than a decade. Looking back, Jen could see her pattern of gaining control of one addiction, and then that leading to another one.

Jen also saw that she was accustomed to living two distinctly different lives. She was working in Corporate America at the time, and she did not talk openly about her eating disorder with anyone. She seemed to be a happy-go-lucky person, and she always came across as loving and caring, but she had a very dark side that she kept hidden. And as much as she didn’t want to acknowledge her dark side, that part of her was slowly winning the battle and taking over.

Jen was living an extremely chaotic life, running in and out of jails and hospitals, and then straight into work. She was trying to keep the two parts of herself separate and it was eating her up inside. She even became suicidal towards the end, from living such an unmanageable lifestyle. She kept trying to fix her symptoms when she was the problem. She couldn’t get a hold on her addictions, and she knew that at some point, she would have to come to terms with the fact that she needed to work on herself.

Although Jen really wanted people close to her, she could never get too close to anyone because she only wanted people to see one part of who she was. And she was working in Corporate America, where there was a stigma around having any kind of mental health issue. So there was a constant battle raging within her between the two aspects of herself, and she felt very alone because there was nobody that she felt she could talk to. It was around this time that she became suicidal because it seemed the easiest way out.

It was only when she was about twenty-five that Jen admitted that she had an addiction problem. And it took at least another five years before she could admit to being an alcoholic, even though she had to acknowledge before that, that there were things about her behavior that didn’t line up. From the age of twenty-five, she was in and out of AA for about ten years.

Jen had to learn to love herself. This became abundantly clear to her when the man she was dating told her so and it was his words that finally launched her into sobriety. This was the first time that she understood what she needed to do.

Coming out and talking about everything has been an interesting road for Jen. She has been well-received and she’s found the experience more liberating than she imagined. However, she realizes that there’s still a lot of work to be done. Although Jen gave herself an entire year to work on her recovery, she knows that will have to continue working on herself every day, after that. Because, since she was twelve, she has never really felt her emotions and she has always been suppressing her feelings.

About five years ago, Jen finally started admitting to her alcoholism. She got sober and began wrapping her head around the recovery process. Although it took a long time for her to find her sobriety, she’s okay with it because she doesn’t think that she would be the person she is today if she had found her sobriety at the age of eighteen.

There is a whole lot of forgiving that goes with recovery. Not just for others, but yourself as well. Jen knows that she would not have been where she is today without having learned to let go.

Jen is six-feet, one inch tall. Now, for the first time in her life, she thinks that it’s amazing, and she is can embrace herself and her uniqueness! She has really enjoyed getting to know and appreciate herself, and she’s learned the value of loving herself and sharing that love with others.

Jen has written a book, called RESET (Recognize, Eliminate, Standardize, Elevate, and Transform). She started writing it on the first anniversary of her sobriety. It’s about what she went through, and how to claim the life that you deserve. It will be coming out in the spring of 2020. You can sign up on her website for the VIP launch, to get a copy of her book for only 99 cents.