97 Before I Leave You with Robert Imbeault 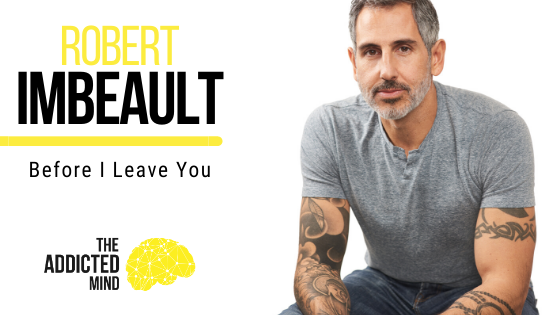 On today’s episode of The Addicted Mind Podcast, Duane sits down with author Robert Imbeault to talk about his book Before I Leave You. Robert also speaks to his own battle with addiction, his suicide attempts, and his eventual recovery.

Based in Ottawa, Canada, Rob shares his story of how experiencing a memory of being raped as an eight-year-old turned his life upside-down as he became a shell of himself fueled by drugs and alcohol as a result. After hitting many rock-bottoms, he attempted suicide a few times. But in recovery, he reminds us that despite how dark the story can be, there is hope on the other side.

Unable to find authentic happiness, Rob pushed further into his work obsession at the sacrifice of his personal relationships. When a memory of his childhood assault comes crashing back, Rob is left catatonic and unable to fully confront his trauma. He let his marriage deteriorate during his spiraling. On a trip to Las Vegas, Rob discovered how alive he felt on ecstasy and cocaine. He believes, too, that these mistakes ultimately empowered him. He’d become all but non-functional at home and at work. The duality between his personal destruction and business success continued to escalate and tear at him. His then-girlfriend’s decision to make him confront his drug addiction more or less made him wake up.

After visiting Walden, Rob knew that he wanted to live. But before this, his awakening to the notion that he was not a good human in any sense made the idea of suicide tempting to him. Ultimately, Rob felt it would free him of all of his burdens. What actually helped turn all of this around for Rob was the decision to write out his rationalizations. He calls them “secret goodbyes,” and Rob credits his writing with freeing him from the bonds of his mental place. It was his “solace” to write. He then started meditating and became a practicing Buddhist. Rob and his wife became pregnant, which enforced their “zero-tolerance” policy. They’ve both been clean ever since.

02:30 — Continue to contribute to the stories of hope.

06:15 — Happiness eluded Rob in spite of his conventional success in his personal and

12:00 — We fail in our attempts to untether ourselves from our trauma.

16:00 — Rob’s girlfriend, who he badly burned, showed him compassion and the truth.

19:30 — A six-day trip to Walden Pond convinces Rob that he actually didn’t want to die.

20:40 — Why Rob was pushed to suicidal thoughts to begin with.

23:00 — Rob starts writing “secret goodbyes” to his friends and family.

30:00 — Before I Leave You is published and Rob describes the value of authenticity.

— “The addiction to working informed who I became and prevented me from looking inside.”

— “You know something’s not right subconsciously, but you never…stop and contemplate your

— “I didn’t know what I loved and hated anymore.”

— “As dark as some times got, there were still some really encouraging turnarounds.”

— “The worthlessness is a big piece.”

— “I’ll tell you what I’m thinking when I can write it down.”

— “We all have those separate little people in our psyches.”

— “There’s freedom on the other side because there’s no more running.”

— “We can rely on change, so no matter how dark it is, light is coming.”

— “Treat yourself as you would someone you take care of.”