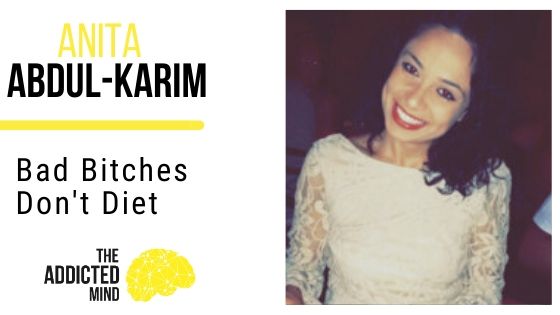 Anita Abdul-Karim is our guest for today. Anita is a registered dietician and she has written a book called Bad Bitches Don’t Diet. Today, she will be sharing her journey and talking to us about her book.

Anita is from the Middle East. She struggled to fit in while growing up because there weren’t many other Middle Eastern people at her school. She was also chubby, and not the smartest kid in the class, so, although her parents did the best they could under the circumstances, all of that added to the social pressure that Anita was experiencing.

Anita was overweight, and that impacted on her socially, and also within her family. So she tried to take matters into her own hands while growing up. Having a scientific mind, she gravitated towards any available information about diets and nutrition.

Anita lost a lot of weight in the seventh and eighth grades. However, in her senior year of high school, a lot was going on, and she gained thirty pounds in one month. It was a very dramatic situation.

Although Anita’s weight fluctuated a lot, she was always aware of being overweight. And although she binged from time to time, she still knew that she wanted to become a dietician, and study nutrition.

Anita has always wanted to understand and move towards the truth. So she enrolled in an excellent program and learned about the science of nutrition. Then she came across a book called Intuitive Eating, written by two dieticians, Elyse Resch and Evelyn Tribole, and that took a huge weight off her shoulders and changed her entire life.

The philosophy behind eating intuitively is all about learning to trust your body to tell you what it needs. Unfortunately, however, most people grow up being taught not to trust themselves. This can cause a lot of misery and even lead people towards addictions because the further you push away from yourself, the more miserable you become.

Anita continued to suffer a lot of social pressure while she was studying because she was still overweight and people often made nasty comments about her being large and studying nutrition. So although she was still suffering the misery of trying to figure out her body, she started learning how to come back to herself and block the opinions of others. She soon learned how to be completely still and surrender to the point of being okay with herself and with everything happening in the present moment. She realized that any deviation from that kind of thinking could lead her towards an addiction.

Coming from a background as a health educator, Anita found that asking her patients questions inevitably led to better outcomes for their lives. That is because asking people questions empowers them and informs them subconsciously that they have the answers to most of their ailments.

To feel the effects of food, you need to pause, do away with all the noise around mealtimes, and come back to cultivating stillness, paying attention, and asking yourself how you feel when you eat something.

Overburdening your body with too much food is painful. It’s important to understand that reaching for food when you’re not hungry, or when you don’t need it, hurts. So sitting with the truth about what’s really going on with you is the best way forward, even though it might seem difficult, or even impossible to do.

You need to learn to ask yourself if the food you’re reaching for is suppressing any pain or if it’s presenting a new kind of pain. And you also need to be courageous in learning these new steps and sitting with your pain to get to the truth that’s hidden inside of yourself.

Once you discover these new places within you, and you start summoning your courage as a resource, you’re sure to start doing things that you previously thought were impossible. And life will become way more fun!

Intuitive Eating: A Revolutionary Program That Works by Elyse Resch and Evelyn Tribole