172 Reclaiming The Lost Languages with Brett Lavender, The Persuasive Lion 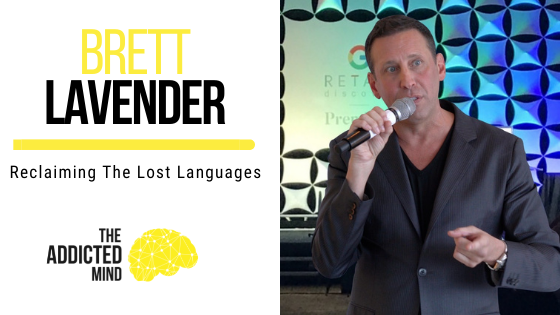 We’re in the worst phase of human history where people are so stressed out, so afraid of judgment, and tentative as it relates to saying anything these days because of this “cancel culture” society.

We have lost an enormous amount of substance and the ability to effectively communicate our thoughts and emotions verbally, vocally, and physically because we’re afraid of the ramifications. But if we can just get back to our basics and start talking to each other as humans, we’re going to be in a much better situation.

On today’s episode of The Addicted Mind Podcast, Duane speaks with keynote speaker and performance coach Brett Lavender about language communication and being the master of our own mind.

Brett is the Founder and CEO of Persuasive Lion, a speaking, training, and coaching practice based on The Lost Languages program that teaches people valuable techniques of persuasive verbal & non-verbal communication to help people lead better and exceed their personal and professional goals.

Brett’s father was killed right after his 6th birthday, and at 19, his mother died of liver cancer. He ended up in a very precarious situation with the couple who took him under their care and wasted all the money his mom had left him. At 21, Brett ended up 100% on his own. Soon after, he started studying humans, and how they would react to his behaviors.

Over decades of self-education, Brett trained hundreds of speakers and communicators. And then it dawned on him how he could also use this to train civilians, who are not speakers, performers, or professionals, but just real humans, who need a better grasp on how to communicate with their boss, their employees, their co-workers, or their family. As he went through this process, he became very aware that we, as humans, are lost in terms of communication, thus, the concept of the lost languages.

[02:01] – “There’s a very fine line between persuasion and manipulation. They’re very closely related behaviors. However, the intention is different.”

[27:54] – ​​”Nonverbal is way more important than verbal… Communication is not an easy thing, especially if you’re uncomfortable.”

[29:39] – “The most important part of the lost languages program is self-talk. Have you ever said to yourself, you’re such an idiot? You should know that is as potent, as powerful, and as potentially damaging, as someone you love and respect telling you that you are such an idiot.”

[31:41] – “How we train ourselves to react to situations is going to effectively create a different reaction from our audience.”

[33:42] “This is something that people who are struggling with addiction suffer from – not being able to expose themselves and communicate authentically and be real.”

[43:59] – “We’re in the worst phase of human history. People are so stressed out, so afraid of judgment because we’re in this “cancel culture” society… if we can get back to our basics and start talking to each other as humans, we’re going to be in a much better situation.”