145 Achieving Recovery Through The Wolf You Feed with Sophie Aghdami 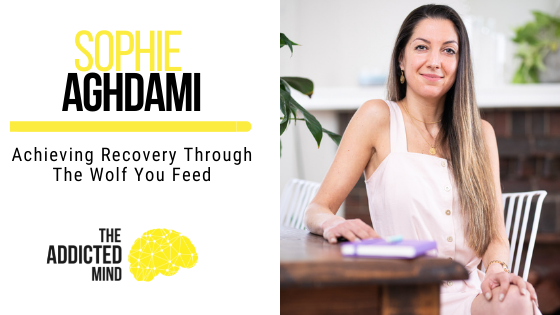 Sophie Aghdami is an addiction recovery coach in Australia. Today, she shares her own story of recovery from alcoholism as well as how a particular parable helped change her whole perspective on recovery, find success in healing, and create a thriving life.

Sophie grew up in Switzerland and the UK and moved to Australia just two years ago. Her drinking started as an early teen. In the UK, it’s a cultural thing to start drinking early or at least be around it a lot. It was just the norm for Sophie. She also worked at a pub surrounded by people who were always drinking and, as she went through university, she stayed in that line of work.

Sophie then started managing restaurants. She loved this job but it was very stressful and the hours were long. As a result, drinking became her coping and stress-release mechanism. She began drinking earlier and earlier in the day until it became her brain’s reaction to cope with stressful situations.

Eventually, Sophie realized that drinking was no longer a fun option for her but a necessity to kickstart her brain to face the day. It was then that she got out of the restaurant industry. Unfortunately, she still found herself stuck in alcoholism afterward.

Finally, after a compassionate conversation with her brother, she decided to go to a five-week rehab in Thailand which was life-changing for her. Soon after, she found her calling as an addiction recovery coach. In this role, she not only helps others but also assists herself in her own recovery.

[05:43] – “In the restaurant industry, and especially alcohol, it’s so socially acceptable. It’s perceived as just doing something really fun.”

[17:24] – “When I was feeding my bad wolf, the relapses would begin or the addiction just continued.”

[17:30] – “​​Feeding the good wolf, releasing that shame, giving ourselves compassion, love, having a connection, all of those things that I mentioned from the parable – that’s where recovery really starts to strengthen and we’re able to maintain it.”

[20:03] – “To think of the bigger things that started being added in, over time, was too overwhelming so I ended up not doing anything. So I thought the best thing to do is do something tiny, and celebrate that tiny thing.”

[22:23] – “Courage is there so just try and reach out and step out of that dark place. There will always be someone there to help because the support is necessary.”

[24:57] – “When we build up the strong wolf, things like self-compassion do get stronger.”