139 Stepping Into the Recovery Elevator with Paul Churchill 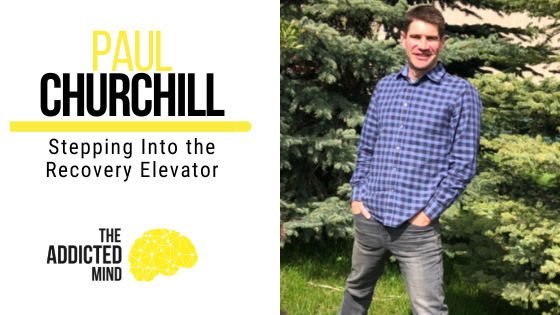 Addictions are many things. But to simplify, they represent parts of our personalities that are out of balance. They represent a part of our body, mind, soul, or spirit that needs a lot of attention and that perhaps was neglected in childhood. As we continue using external substances, these imbalances get louder and louder until they have to be dealt with. Eventually, we get stuck in a cycle of shame and guilt that leads to hopelessness.

On this episode, Duane speaks with Paul Churchill, the host and founder of Recovery Elevator. In 2015, Paul launched the podcast, which he thought was a risky move having only been six months sober from alcohol. It was a calculated gamble that actually saved his life. Now, it has opened a lot of doors for him to meet great people and impact other people’s lives.

Paul was a normal drinker for about seven years since he was 15 years old. Soon, he found how the drug alcohol let him overcome his insecurities and fears in early childhood. At 22, after he graduated college, he moved to Granada, Spain and bought a bar. Moving to a foreign country with a drinking problem to buy a bar in Spain at a young age was a total dumpster fire. It was both the best time and the worst time of his life.

The tipping point came at the very end when he blacked out for three straight days and realized he was tiptoeing around life and death. In 2010, he decided to go a month without alcohol and ended up going two and a half years without it. He was going forward on willpower. When you’re viewing life without alcohol as a sacrifice, your time is limited. So he went back to drinking, stopped again, and then went back to alcohol again. It was a cycle that gave him a sense of hopelessness to the point of him attempting suicide. In 2014, he finally surrendered and stopped fighting.

Now, here he is – seven years later. He believes his addiction served a purpose that directed him to move forward in life without alcohol and to go internal instead of external for happiness and support.

[03:13] – “Addictions are many things. But to simplify them, they represent parts of our personalities that are out of balance.”

[04:16] – “Alcohol was a self medicating elixir in it. It worked wonders. The problem was it wasn’t sustainable.”

[07:11] – “It’s a real dangerous cycle that we can get on where we have intense anxiety, alcohol relieves it. And then when alcohol goes away, there’s more anxiety.”

[10:23] – “When you have lost all hope, and you really come crashing down into the present moment, that’s where the bulk of the recovery work happens in this present moment.”

[14:50] – “A lot of these addictions, especially in modern society, they’re adaptive behaviors.”

[23:08] – “It is a societal issue. And it’s not the issue for just the addict or the alcoholic. And it’s not even really their fault. A lot of this is generational and passed down.”

[24:06] – “How to depart from addiction is complicated… but it can also be as simple as community and accountability.”

In the Realm of Hungry Ghosts by Dr. Gabor Maté