114 The History of Opium with John Halpern & David Blistein 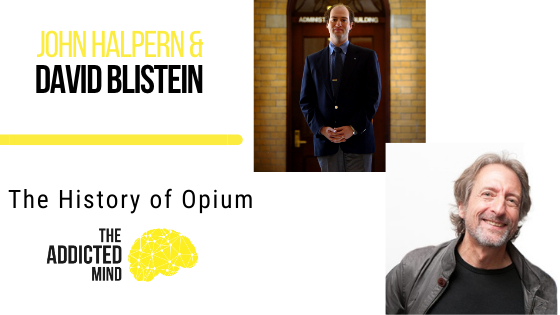 Opium has been around but what many people don’t realize is how much it has shaped society and culture. The United States has spent over $1 trillion on drug enforcement since President Nixon declared a war on drugs. And by any measure, that crisis has become worse. Could we ever imagine a time where humanity is finally free of these substances?

On today’s episode, Duane talks with John Halpern and David Blistein, co-authors of the book, Opium: How an Ancient Flower Shaped and Poisoned Our World, where they talk about the history of opium and the reasons they wrote this book. It’s a call for compassion and care for people who are struggling with addiction.

Unfortunately, our current system is not providing proper treatment. Worse, we punish people for not accepting treatment or seeking it out in the United States. The person who gets blamed is the one who’s suffering. Whatever people need to do politically or as a society about these issues of drug abuse should not be legislated onto the backs of our patients’ suffering and pain. And yet, that’s still is happening.

The Substance Abuse Mental Health Services Administration admits that over 90% of people in the United States who would like to get serviced have no ability to get treatment.

There’s a confusing message we’re sending out to people that there’s no safe way to use it. We’re not talking about what these drugs do. We’re not accepting how they are medicines and that they have these horrible side effects, and extreme versions of those side effects when we see somebody addicted.

Instead, we punish them as if they had a full volitional choice when it’s causing changes to their brain over time. At the end of the day, we need to welcome people with substance abuse issues for being the human beings that they are and with the problems they have because we all have problems. And we need to treat them with respect and love and understanding and learn from them.

[10:44] – “Now, people think that if you ever do oxycodone for pain, the next thing you know, you’re going to be in a rehab center. And it’s not true, but it’s walking the line.”

[12:59] – “We are tethered much more tightly to the opium plant, a plant that does not even exist in the wild today more than ever.”

[17:19] – “I consider drug court a human rights crime because we have prosecutors and judges pretending that they can practice medicine when they have no training in it.”

[20:25] – “We turn around without providing proper treatment, and then we punish people for not accepting treatment or seeking it out in the United States.”

[28:15] – “There are more people dying each year now from opioid-related overdoses than those that died in the Vietnam War. That’s 70,000 people a year dying now.”

[35:23] – “Labeling heroin and other opiates as drugs of abuse doesn’t erase the fact that they are medicines in the United States.”

Opium: How an Ancient Flower Shaped and Poisoned Our World by John Halpern and David Blistein