Your Road to Healing: Understanding The Trauma Map with Dr. Karol Darsa 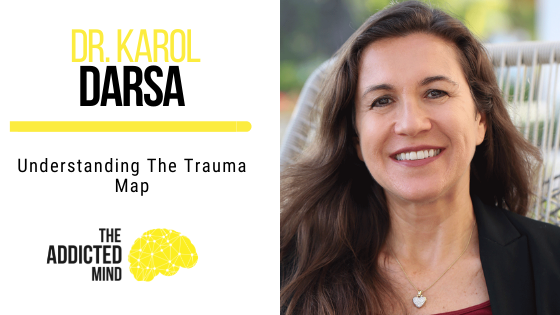 If you think trauma only happens to people coming out of war or to those who have been sexually abused, you have to read to the end of this.

Dr. Karol Darsa is the author of the book The Trauma Map: Five Steps to Reconnect With Yourself. She explains how trauma could impact us in our everyday life. A huge part of solving the puzzle is dealing with our traumatic histories so we can begin to heal and feel better.

Trauma refers to an overwhelming situation that leaves you feeling powerless and unable to cope. It’s not the same for everyone because there are a variety of factors involved.

Trauma can also result from smaller incidents when people didn’t even realize they felt traumatized.

The most common trauma that people minimize is relational trauma. That could include growing up with parents who were always absent so your basic emotional needs were not met. That could render you feeling powerless. Relational trauma could also happen to a child whose mother or father is sick for years and who is constantly in fear of losing a parent.

It happens in such small increments and subtle ways that you don’t realize to what degree you are impacted by it.

In relational traumas, reactions don’t function in the same way as they do in traumas related to war or sexual abuse. You have to be able to look at your symptoms and recognize trauma. For instance, maybe you have difficulty in relationships, whether romantic, at work, or with friends. You may have consistent anxiety and depression or mood disorders.

If you can’t find the origin of those symptoms, you have to look at your past to get a better understanding of why your body and nervous system are reacting in such a way.

Ultimately, it’s important that we’re able to raise awareness of trauma and educate ourselves about what constitutes trauma rather than thinking it’s only possible after a big event.

If you want to learn more about the basics of trauma and some steps to deal with it, check out Episode 151: Understanding The Trauma Map with Dr. Karol Darsa.