Unraveled with Laura and Tom Boldt: A Mother And Son Story of Addiction and Redemption 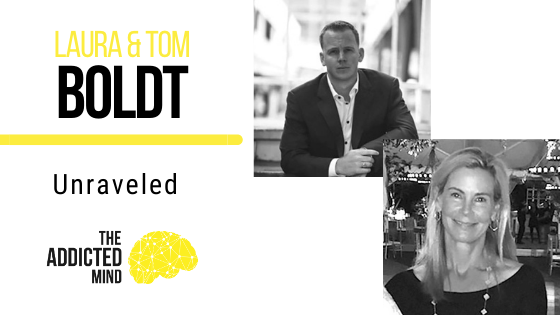 Addiction is a family disease because everybody around you suffers from it. The family has a very important role to play during this healing process and there needs to be understanding and compassion.

Coming from a family of many alcoholics, Laura was certain she wasn’t going to end up like her alcoholic mom. But fast-forward to having four children, Laura fell into full-blown alcoholism when her youngest child was two years old. Her drug of choice was red wine.

About three months before she quit drinking, her husband brought it to her attention that her alcohol intake was increasing and this affected her profoundly. She knew her husband was right. But she was terrified. The thought of going to rehab and leaving her four kids was just preposterous. Laura even recalls stealing vehicles when she was drinking and thought it was funny. At some point, she realized it was embarrassing but she just couldn’t stop. She didn’t want to.

It was on Halloween night in 2008 that everything changed for her when she got into a serious car accident. She could even barely remember what happened to her the next morning. At that point, she knew she needed help.

Laura’s eldest son, Tom experienced bullying in his early years and switched schools a bunch of times. He simply wanted a place to belong, which sadly, he had found in drinking and drugs.

While alcoholism kind of reflected how Laura was living free and having fun, it was completely opposite for Tom. It was more violent. There was more blood and there were more hospital visits. His alcoholism worsened that it led not only to broken bones, but also, broken relationships.

Then one Halloween night in 2012, he got in a couple of bar fights and ended up running down the freeway. The next morning, he just decided he was done.

Their Road to Recovery

The family plays an essential role in the recovery of an addict. Luckily, Laura’s husband was a man of great compassion who was very supportive of their healing process. It’s very important as a family to become educated, to share conversations with the rest of the family, to learn the language, and to learn compassion.

Also, part of Laura and Tom’s recovery process was writing the book Unraveled, A Mother and Son Story of Addiction and Redemption. The element of writing a book together was not only cathartic to both of them, but it gave them the opportunity to share a message of hope in mending relationships and in living a more fulfilling and healthy life. If you want to learn more about Laura and Tom Boldt’s journey through recovery, check out https://theaddictedmind.com/113-unraveled-with-laura-and-tom-boldt