Treating the Underlying Causes of Addiction 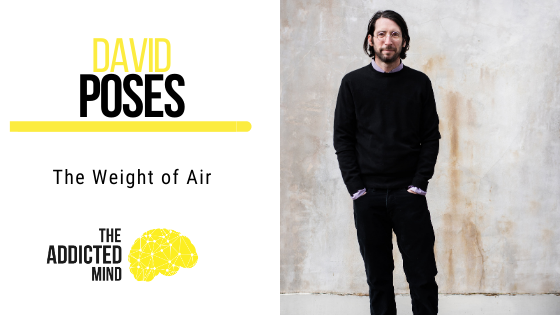 Sometimes you have to fight fire with fire. That cliche is true even (and sometimes especially) when dealing with addiction.

Today’s guest is a prime example. David Poses is the author of The Weight of Air: A Story About the Lies of Addiction and the Truth of Recovery. In this memoir, David covers his heroin addiction and how he used buprenorphine to help him overcome it.

From a very young age, David was depressed. He had been in therapy since he was 4 or 5 and had taken multiple antidepressants, but none had worked. That led him to seek out heroin as he had heard it made you feel nothing at all.

He quickly got addicted and ended up in rehab. While he was there, both his mom and his counselor told him that the heroin was causing him to be depressed. They didn’t listen to how much he was hurting but blamed his mental illness on him.

Over the next 20 or so years of his life, David suffered silently. He continued to abuse heroin on and off and feel extremely depressed. Years down the road, he learned that buprenorphine was a maintenance drug.

David immediately started calling every doctor within 200 miles from his house. All of them told him they couldn’t prescribe buprenorphine because he wasn’t actively using drugs at the time. However, he kept trying and finally convinced a doctor to prescribe it when he told him he was going to die without it.

After meeting with the doctor and taking it, he felt the effects almost immediately. It wasn’t exactly what he felt he needed but it was enough to get him through, like wearing a snorkel to breathe underwater. This not only saved his life but gave him his life back.

Based on his experience, David has amazing insight into addiction treatment and some of the real issues surrounding how it is viewed today. The truth is, there’s a reason that people start using substances. They are hurting from one thing or another.

When they get addicted, they are actually self-medicating. The reason for their initial pain is what needs to be dealt with above all else. If they just stop using the substance they are addicted to, the underlying problem will remain.

If you want to learn more about the changes that need to be made in the way treatment is viewed in our culture, check out Episode 123: The Weight of Air with David Poses.