Neurosurgery and Poetry with Paul Kaloostian 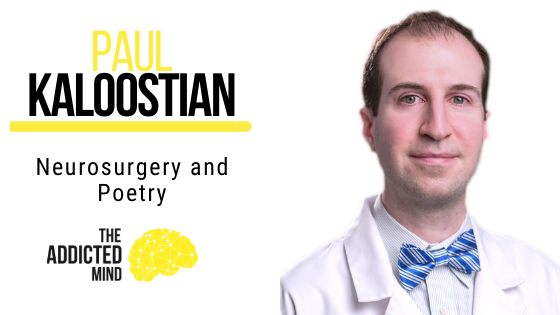 As a neurosurgeon for 17 years now, Dr. Paul Kaloostian has dealt with thousands of cases of people with neurological conditions. Seeing the need for awareness of mental health, he has written some poetry books to make it easier for the world to understand what it’s like for patients who are going through neurological conditions, some of which are caused or aggravated by addiction.

The Areas of The Brain Responsible for Addiction

Some of the areas of the brain that are involved in addiction include the frontal lobes as well as the memory areas like the hippocampus and nucleus accumbens. These are the areas where dopamine is made. Your eyes and your visual areas also play a huge role in addiction.

For instance, you may see people doing drugs and drinking alcohol. The mind then takes you back to the time when you used to do that and were having a good time. That memory center where you remember those good times make you want to do it again. You also have the visual areas because you’re seeing people have fun.

Oftentimes, it’s the reward part of the brain that dominates because people like that high feeling of winning and being happy and super excited. Addiction also suppresses the parts of the brain responsible for calming you down. All of these play a role in the addiction process.

Why Addiction is So Hard to Control

No one wants to be addicted. However, the brain is so powerful that what our brains decide to do is what we do. That’s why the brain is such a fascinating and critical aspect of our lives. We don’t really have that much control. That’s why addiction is such a hard problem to fight and beat.

The brain is a powerful organ so once it gets stimulated, it’s difficult to change. It takes work and energy – but it’s not impossible.

So the best way to avoid addiction is to not get started in doing those types of things. However, once you do get started, it’s very crucial to seek help, both physically and psychologically. It’s also important to avoid those situations where your eyes and your memory areas will get stimulated to possibly get back into doing those things.

If you want to learn more about the role of the brain in addiction, check out Episode 133: Neurosurgery and Poetry with Paul Kaloostian.