Neurofeedback: The Gym for Your Brain with Dr. Andrew Hill 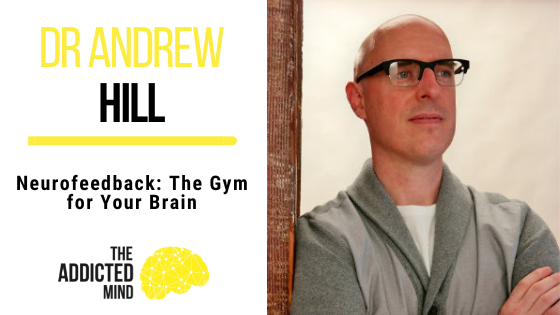 Can you train your brain to improve your sleep, better your health, and possibly abolish your tolerance for alcohol, drugs, or other things you might be struggling with?

According to Dr. Andrew Hill, peak performance coach and the founding director of Peak Brain Institute, one of the most insidious things about brain and mind-stuff is that we feel like things are not going to change, and that is just not true.

The brain shift happens – and it’s not a question of if, but how.

The Science of Neurofeedback

Neurofeedback is biofeedback or a form of control where your brain is shaped or exercised so you can take control of your own neuroscience the same way your personal trainer at the gym helps you move through your fitness and body transformation goals.

Also known as brain training, most forms of neurofeedback are a passive form of operant conditioning, but in an involuntary form. It’s essentially taking something you’re not usually aware of.

For instance, they’re raising information from the brain waves or blood flow up to a level where the brain can interact with it.

Dr. Hill emphasizes the use of the brain, not the mind. Hence, it’s different from the classic biofeedback techniques such as the use of relaxation therapy.

Imagine sitting in front of the screen and watching what seems like a video game and it tunes your brain to how you want it to function and operate. The video game only runs when your brain happens to do the right thing for that day’s exercise as the brain tries to figure out what’s happening.

​​For instance, in the first 20-minute session, neuroscientists train a frequency in the brain called sensorimotor rhythm (SMR). Specifically, they measure the amount of theta and the amount of beta you’re making, moment to moment.

Whenever your brain happens to make a little bit less theta or a little bit more beta for half a second, the computer applauds your brain by making auditory and visual stuff in the environment that starts to happen. Then a couple of seconds later, the brain moves in the other direction. The theta goes back up and the beta might dip, and the software slows down.

Then another couple of seconds later, it moves in the right direction and the computer resumes the applause. The big trick here is to move goalposts by adjusting their goal every few seconds.

It’s mostly involuntary because you can’t feel your beta waves or your theta waves. But after about three or four sessions, you get this lingering effect that tends to show up for a couple of hours to about a day. It impacts the resources you have trained like your sleep, stress, and attention, and you get noticeable changes.If you want to learn more about all things neurofeedback and how it impacts addiction recovery, check out https://theaddictedmind.com/186.