How Peer Recovery Support Changed His Course with Justin Larson 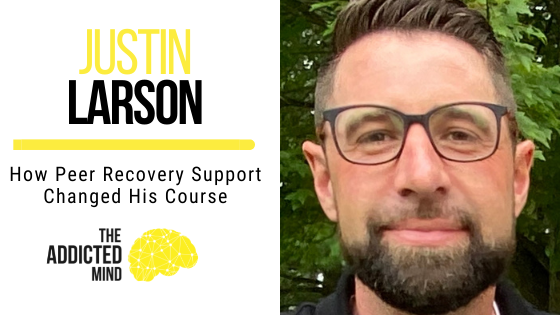 Diagnosed with depression as early as eight years old, Justin Larson found himself in a very dark place where drinking just became his number one coping mechanism. He was feeling fearful and anxious all the time until that time he picked up a drink and it just made all of those go away.

At that moment, he fell in love with alcohol. Soon, it became his best friend that later controlled his life. For him, it was the missing link to life, having found the one thing that enabled him to cope with life.

Now serving as the director of health systems for Thrive Peer Recovery, Justin shares the value of peer recovery support and how it has assured him that he was not alone. Having gone through hell and clawed his way out of it, he wanted to pay it forward by helping others, who are going through the same path, claw their way out of the deep pit, too.

The Unique Role of a Peer Recovery Supporter

As a peer supporter, sometimes it’s just about planting a seed and letting people struggling with addiction know that recovery is possible. And being that example of recovery in action is huge because it allows them to see that there’s hope. Other times, too, it’s about holding their hand until they can walk on their own two feet themselves.

Just being there can add to the solution to show people in addiction that there’s a way out. And so, seeing someone who has done it generates positive possibilities.

How a Peer Supporter is Different From a Counselor

As a peer, sometimes it’s just about being an active listener, or about using narrative therapy, or motivational interviewing. That being said, it’s also a very non-clinical role that’s why it’s different from a counselor or a therapist, where they may not be able to share much about their lived experience, or they may not even have lived and experienced recovery.

As peer supporters, all the ammo they have to use is their lived experience. They can self-report everything they’ve been through, hoping that the person struggling with addiction who hears it can identify with it and relate.

Being a peer supporter is part of a treatment team. It’s not in place of any of the doctors or the nurses or even the social work. But they work very closely with those folks because, sometimes, it takes a village, and they are there to help out with that lived experience piece.

If you want to learn more about Justin’s story and how peer recovery support can help you, check out Episode 174: How Peer Recovery Support Changed His Course with Justin Larson.