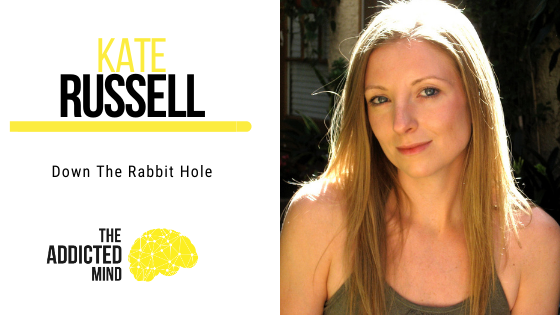 Addiction is often the result of pain in our early years of life. Whether it’s passed down through genetics or an attempt to escape the pain, many addicts can point to a hard childhood as the source of their addiction. This is why it’s so important to recognize our family patterns and root out the disease of addiction while we still can.

Kate Russell grew up in just such an unhealthy environment. She was physically abused as a child and was raised by an alcoholic mother. However, she now holds amazing compassion as a result of having worked through her trauma and eventual addiction.

Down The Rabbit Hole

Kate is now the author of Down The Rabbit Hole, a memoir of abuse, addiction, and recovery.

The title came from the idea that addicts often go down a rabbit hole with their thinking.

Kate experienced this with both of her parents. They would get triggered, fall down the rabbit hole, and have no idea how to get out.

As a child, Kate would also fall into negative thinking and self-pity whenever she abused. She recognized in her adulthood that she would fall back into that mindset whenever she was critiqued. However, she learned how to become mindful of her thought patterns so she wouldn’t fall down that rabbit hole.

After suffering physical abuse from her parents, Kate eventually developed an addiction. The older Kate got, the more she realized how necessary a mind-altering substance was in order to have a happy day.

As she began to understand that, she also realized that that was exactly what her mother was going through. Kate’s drug of choice was marijuana, while her mom’s was alcohol, but they were dealing with the same core issue. There’s no real difference because the disease was the same and it worked on their brains in the same way.

Eventually, Kate made the choice to make a change.

However, she thought that recovery would be a matter of getting sober, and then everything would be happy and joyful all of the time when in reality it’s been more of a process of unpeeling the onion. She has had to slowly unpeel the layers of who she is and progressively learn more about herself.

That has been hard work and she has certainly still had bad days. She has also realized that it’s an ongoing disease, one that she’ll never fully heal from. However, despite all of this, she knows that every day she remains sober is better than one would be if she used again.

If you want to learn more about how Kate worked on her mindset and overcame her struggles, check out Episode 120: Down The Rabbit Hole with Kate Russell.