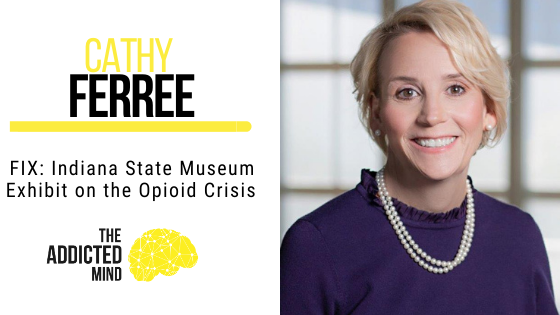 When Cathy Ferree was appointed president of the Indiana State Museum in 2017, she met a woman who talked about her son who had died of an opioid overdose who now runs the Overdose Lifeline. Also raised by two psychiatrists, Cathy is aware of the stigma behind mental health and substance abuse disorder and those types of things.

Having been raised to be very cognizant of people and their feelings, and how much people try to live behind things rather than in front of them, Cathy took charge in finding a role that a museum could play in helping with this crisis.

FIX: Heartbreak and Hope Inside Our Opioid Crisis

Substance abuse disorder is something that people don’t always discuss, and what you don’t know, is where you can go awry. For years and years, museums are a place where people trust to give you information and put things in context for you.

The exhibit provides an opportunity for people to understand how people can end up with substance abuse disorder, how it happens around opioids, and that it’s a medical condition and a disease.

For example, one of the iconic pieces of the exhibit shows you exactly what happens to your brain, how your neurons respond once you start utilizing opioids, and why it’s a very difficult disease to overcome. Unlike other diseases, it also manifests itself in behaviors that make it hard for people to really understand.

One of the most important and probably the most difficult things they had to do was to bring in sixteen very courageous people to come forward and tell their stories. As the event organizers, they felt it was really important to be able to put a face to what substance abuse disorder looks like. And many times, it can look like you, your neighbor, your aunt, your uncle, your cousin, your grandfather, your doctor, or your lawyer.

They wanted people to understand the humanity side of this. And so, being able to hear the stories about how people find themselves with substance abuse disorder can give us a better sense of how we all can make a difference.

At the end of the exhibit, they ask for you to do these three things:

If you want to learn more about FIX: Heartbreak and Hope Inside Our Opioid Crisis, check out Episode 115: FIX: Indiana State Museum Exhibit on the Opioid Crisis with Cathy Ferree.