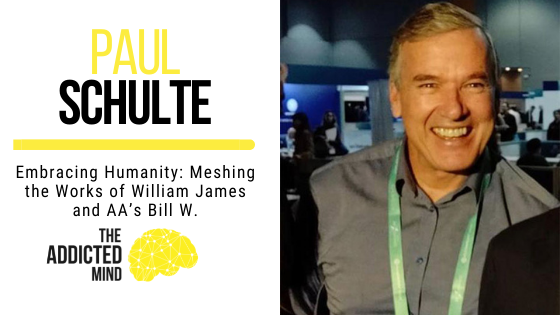 What is the universality of the human condition?

In his book, We Agnostics, Paul Schulte explains that a lot of work in Buddhism, Hinduism, Catholicism, Protestantism, Transcendentalism, Sufism, and Islam are all the same thing. This underlines the crisis of self-despair and reaching out to a higher power that suddenly offers us a way out or a sense of propulsion.

There is a confession of ancient sins and ancient hurts then having a dam of tears and then feeling a sense of community and union where helping others is a natural outcome. In his book, Paul reveals the basic vein of similarity in all these different spiritual movements in human history.

Resonating with the Great Mind of William James

William James threw a lot of energy into the study of the subconscious and where the urges to suddenly stop what seems like a chronic behavior comes from in humans. In his book, he questions what causes these transformations in humans.

Founder of Alcoholics Anonymous, Bill Wilson, got hold of William’s book from his friend, Ebby Thatcher. The 12-step movement was inspired by the works of William James, as evidenced by the similarities between these two great works.

According to William James, self-loathing, alienation, and fear are the three marks of the “soul-sick.” Then, the soul moves toward a new center of heat and light which is a sense of serenity and peace of mind. The mark of a spiritual experience is twofold: first, life gets bigger and, secondly, we feel like we belong and unite with other people.

William explains that we have been reading about this for 3,000 years. There’s this desire to move towards some new form of regeneration of the human spirit that comes to us from the subconscious.

Whether this is a natural thing or a spiritual thing, he says he doesn’t know. If it’s a spiritual thing, then it’s better because most of these occurrences happen in the realm of spirituality. But it may just be natural. We don’t know what this God is even though this is a natural process. That’s why he says we are all agnostics. Nobody gets to go behind the veil into the subconscious to see how it all works. The experiences we all have are fleeting and hard to explain. However, they’re also deeply personal as they’re only understood by the individual.

If you want to learn more about William James’ work and philosophy, check out Episode 165: Embracing Humanity: Meshing the Works of William James and AA’s Bill W. with Paul Schulte.