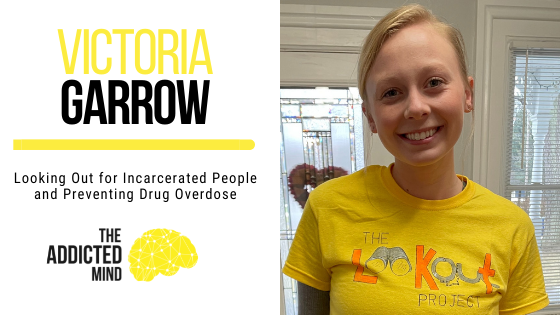 Did you know that in some states, in two weeks after someone is released from incarceration, they are up to 127 times more likely to die of a drug overdose than the general population? On top of that, over two-thirds of people incarcerated are struggling with substance use disorders.

On today’s episode, Duane speaks with Victoria Garrow, co-founding member of The Lookout Project, a nonprofit founded by five college students at the University of Michigan. Victoria explains the reason behind that big overlap between incarcerated people and overdose deaths, as well as their harm reduction approach to addiction treatment and recovery – one overdose response kit at a time.

Victoria also shares her own experience with addiction in her family, losing her mother to a drug overdose when she was still 13 years old, and the impact it had on her, eventually turning that experience into founding The Lookout Project. Their hope is that people will be on the lookout for an overdose, especially among incarcerated people once they get out of prison.

The antithesis of treatment is isolation. We saw it during the COVID-19 pandemic when many people were dying of overdoses and the rate of addiction was escalating – mainly because they were completely alone.

Through these harm reduction approaches, more people can get access to services despite using drugs. This allows for human interaction, kindness, and connection, thereby, taking away some of the stigma surrounding drug use and welcoming people who use drugs into a space that lets them feel they deserve to be alive.

[04:41] – “In the two weeks after someone is released from incarceration, they’re up to 127 times more likely to die of a drug overdose than the general population.”

[08:20] “The reason why people coming out of incarceration are so vulnerable to overdose is that after being incarcerated, drugs are leaving their system. They’re forced into detox and through that process, their tolerance is dropping way down.”

[09:04] “When those opioid receptors in the brain are full, that actually halts breathing. And so, the Narcan is able to push those opioids out of the receptors and allow breathing to return again.”

[10:14] “Our hope is that people will be on the lookout for an overdose… or when someone is incarcerated, looking out to when they aren’t going to be incarcerated anymore and thinking about how they can prevent overdoses for themselves and also people in their lives.”

[25:07] “Recovery is any positive step towards change and improvement in one’s life… it could just be testing your drugs and using clean needles and making sure you have Narcan with you.”

[25:58] “The antithesis of treatment is isolation. And that’s what we saw during the COVID-19 pandemic, many people dying of overdoses and addiction escalating because they’re just completely alone.”

[26:11] “Having these harm reduction approaches where more people can get access to services despite using drugs allows for human interaction, kindness, and connection.”